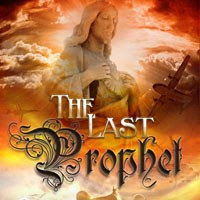 Would you believe it if someone told you that you were one of the last two prophets mentioned in the book of Revelation? It is the End of Days. The power of the Antichrist and his grip on humanity grows stronger with each passing day, enabling him to deceive the world and entice humanity into joining him in his corruption, and in his eternal punishment. With the help of the False Prophet, the Beast persuades many to fall down and worship him, also forcing them to take his mark.

When someone tells John March that he has been chosen by God to become the last of the two prophets mentioned in the book of Revelation, he doesn’t believe it. After a visitation by an angel followed by a miraculous sign however, he becomes convinced that it is true and decides to embrace his calling, despite learning that doing so will lead to his untimely death. March begins his mission by proclaiming God's message: that the End of Days is at hand, to beware the growing power and influence of the Beast, and to know that the Second Coming of Jesus Christ is imminent.

Supernatural disasters, including a worldwide drought, rivers of blood, massive earthquakes, and a devastating asteroid, testify that the end of the world is at hand. Join John March on his journey to becoming, The Last Prophet.

Email ThisBlogThis!Share to TwitterShare to FacebookShare to Pinterest
Labels: L