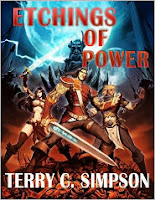 Genre - Fantasy
Rating - PG13
Connect with Terry C Simpson on Twitter & Facebook
Blog http://terrycsimpson.wordpress.com/
Check out where this author will be talking about his latest release!

Death feeds life in the world of Denestia. The shade advances, bathing the land in blood as they massacre all before them. Magics and creatures long thought dead rise again.

To the east, in Ostania, an ancient clan re-emerges to begin their conquest anew, leaving carnage in their wake. To the west, the ruling Granadian Tribunal tries to maintain its stranglehold on its empire while expanding into Ostanian lands under the premise of converting the 'uncivilized' to the path of enlightenment.

Hope rests on the swords, intelligence, and power of four: Ryne, a living legend at the edge of madness, haunted by a murderous past, the voices of his power that whisper in his head, and hunted by the Tribunal, strives to defend a village he swore to protect. Ancel, a gifted student who has lost his way due to a love spurned, is stalked by the shade's minions and must learn to accept who he is or perish. Irmina, Ancel's former lover, and a Tribunal assassin sent to find Ryne, is mired in her quest for revenge on Ancel's parents, and must set aside her emotions or fail her final test. And Galiana Calestis, an old Matus whose greatest wish is to help her people survive, must manipulate whoever she needs to if she's to see the Chronicles come to pass.Between warring nations, vengeful leaders, magic and steel, myth and men, the fate of the world hangs in the balance. Who can unite the kingdoms against the encroaching darkness? Who shall bring the power that drives the world to heel? Who will walk the knife's edge of harmony? If none can, then Denestia is doomed.
at 07:03

Email ThisBlogThis!Share to TwitterShare to FacebookShare to Pinterest
Labels: E