A warm welcome to Allie Burke as she shares an excerpt from Violet Midnight, Book 1 of The Enchanters Series

“Elias! Don’t call me Auntie, it makes me feel old. I’m so glad to hear from you! Did you get the spices and the tea I sent you?”

“Yeah,” he whispered, a quiet attempt to hide any skepticism or awkwardness that may be in his tone.

Elias closed his eyes. She was too good. There was no point in answering her. He had no idea how to explain how he was feeling at the moment.

“Has your mom called?”

Jeanine let out a long sigh, which Elias could hear through the phone. She didn’t say anything further on the subject. There was nothing to say.

“Listen,” Elias said, “I’ve heard about this great place. Come out with me; I’ll buy you dinner.”

Elias walked out the door, and got in Liam’s black Aston Martin. Liam had left everything he had to Elias, except the firm. He knew Elias didn’t want it.

After a few minutes of driving, Elias reached a small residential area. He turned onto Church Street and pulled into the driveway. He smiled at his aunt’s house. Most of the small houses on this street were painted different shades of brown. Jeanine’s house was fuchsia with lilac trim and royal blue stairs leading to the porch. The yard was a mess. The grass couldn’t have been mowed in years. A small piece of white cloth distracted his view, and he looked up the tall oak tree in the yard. Hanging from the branches were shredded pieces of toilet paper, looking battered and weathered, like the tree had been teepee’d several weeks ago. Someone had used a screwdriver to draw a large X on the tree’s trunk.

Elias walked across the yard, the weeds attacking his knees, and went up the stairs. Two dead rats were next to the welcome mat, and several broken egg shells were scattered around the porch.

The door opened, and Jeanine smiled at him. She was sixty-two, not a gray hair on her head. Her fine brown hair was long, but she never let it down. She wore a long dress, every color known to man coming together on it. A bright blue scarf circled her neck, and her brown eyes were lined with pink shimmery makeup. He let out a long breath, relieved at the sight of her.

“Look how handsome you are,” Jeanine said. “It’s been too long. Come here.”

Elias stepped forward, hugged her and kissed her cheek. They walked to the car. Elias opened the passenger door for her, and drove back to Hazel Grove.

“Why don’t you move to Hazel, Jeanine?” Elias asked her in a very strict tone. They were thoughtless pranks, the neighbors clearly upset that Jeanine lived in their town without a family and with her crazy antics. Elias worried that it could turn to something dangerous. If Jeanine was harmed—Elias shivered, unable to complete the thought in his head.

“You know, I was going to. I was looking for a new house, so I rented this place temporarily until I could find something I liked. But I decided to stay the first time I found dead rodents on my porch. So I painted it pink.” She was smiling.

Elias just laughed. She was completely serious, and would not be influenced. That was just her.

Jeanine laughed. “No, I like it. It scares the neighbors.”

Elias shook his head at her. She did sound crazy sometimes, but she wasn’t. She was the only sane one in their family, as far as he was concerned. She was nothing like her younger sister, Elias’s mother. Jeanine was a free spirit. Her paintings were amazing; she sold them to Hollywood celebrities and wealthy people all over the world. She never married, had no children, and didn’t regret a minute of her life. Of course his mother didn’t approve, but Elias could care less. He admired her.

After a few minutes, they reached Ruby’s Diner. He parked in the back, ignoring onlookers’ stares. They were looking at the car, not at him. They went into the diner, and found a small table in the corner. A young girl in a red polo shirt walked up to their table. She was a little plump, like she enjoyed food, but not fat, just comfy. Her nametag introduced her as Audrey.

“Welcome to Ruby’s. What can I get you?”

Elias looked across the table to Jeanine. She shrugged. “Whatever you think.”

“Are the rumors true?” he asked Audrey. “Is The Ruby as good as everyone says?”

“To drink? We have a special blend of iced tea. It’s fused with rosemary.”

Elias’s throat crackled, and his laugh was so loud it was almost obnoxious in the setting of the quiet diner. He cleared his throat and forced a calm look on his face.

“That sounds great,” he said carefully, short pauses bubbling composure between each of his words.

Audrey narrowed her eyes at him before she walked away, as if she was assessing if he was insane. Elias covered his eyes with his hand. He felt Jeanine’s eyes on him, but he didn’t look up until she spoke.

He just stared at her.

“I’m going to think your nuts? Really, Elias? Look at me. Look at me and tell me that anything you could say would make me love you any less.”

Elias breathed deep, and gave in. He told Jeanine about the strange encounters at the art gallery and in his studio.

“I want to see her,” he heard himself say.

Audrey arrived with the food, her presence preventing Elias from seeing Jeanine’s reaction. He didn’t want to worry Jeanine too much, so he ate. Even with his lack of appetite, the sandwich was surprisingly delicious; there were at least three different meats, and a variety of cheeses in between each layer. The grease dripped from the bottom of the bread onto his plate. The tea paired with it well; it was very unique.

Halfway through his meal, Jeanine finally spoke. “Elias, I want to tell you a story. No questions. Just listen.” 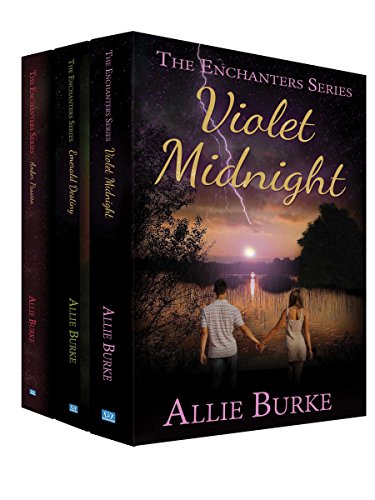 Buy the box set on Amazon

Violet Midnight Book 1: Look into the world of the Enchanters, where water has a sense of humor, trees scare people, and love... is destiny. Beautiful Jane is hovering at the edge of content in her life of solitude in the quiet town of Jasmyn Lake, but when her energy sends her on a journey to meet the man she has been dreaming about for months, she cannot resist. Meet sexy artist Elias, who moved to Hazel Grove, California to get away from the rain, his parents, and everything that was taken from him in Hayward, Washington. But he thinks he may be losing his mind when he starts seeing purple glitter in the air, the scent of rosemary is everywhere, and he is hearing a beautiful voice. But all is not flowers and ease for the newly joined couple. With a woman who prefers night to day and a man with heartache from his past, they must learn how to create their own world with grace and the occasional water feature. Written with humor and intensity, book one of the three part trilogy will leave you yearning for more and daydreaming shades of purple.

Emerald Destiny Book 2: What happens when the girl you've loved since you were six-years old runs away from you, effectively breaking your heart again? Evan is about to find out.  Nineteen-year old Evan spends his time in the woods of Dare Forest where the trees have personality, as close to Abby as he can be. But love has a cruel master and everyone around him has forbidden he contact her. Abby's nights are stressed with her Enchanter life, her dreaded nightmares, and her enduring will to save her brother from his own inner darkness. But when Evan speaks to her for the first time in fourteen years, she finds his voice too painful to bear. Countless times before them, the union between their opposing families has failed and caused unfathomable destruction. The love in their hearts strives to be together forever, but will their destinies break them apart? Allie Burke's second novel in The Enchanters Series breaks through the Paranormal Romance genre to not just entertain her readers but empower and inspire them to embrace the momentous question: What would you do when faced with an impossible love?

Amber Passion Book 3: With a modern touch, Allie Burke’s third and final novel in the Enchanters series plays off the age old question: How far is too far to protect those you love? True love can be demonstrated in a multitude of actions or a multitude of sins. You choose. Daniel is lost without his other half, his twin sister Abby, who is pregnant, depressed, and oh so far away, struggling with her own demons. Seeking a ray of sunlight in his dark world, Daniel visits Hazel Grove and for the second time experiences the sun shining in the middle of the night. But this is a sun with a different name. A sun with blonde hair and an orange aura and with a bright light that scares the darkness right out of him. The blackness that had been his heart for the duration of his life, is…fading. Can the enchanting Claire bring passion and comfort to a man who yearns for her without even realizing it? As the next generation of Enchanters make their choices, the outcome will change the course of their people forever. Only time, and love, will tell if they made the right choice. With a culmination and a turn of events you never saw coming, Amber Passion answers the questions you wondered about and leaves the reader forever changed and daydreaming in every shade imaginable, starting with darkness, and ending, at the end of the tunnel, with light. 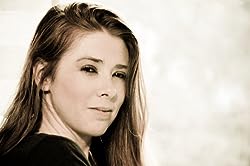 An American novelist, book critic, and magazine editor from Burbank, California, Allie Burke writes books she can't find in the bookstore. Having been recognized as writing a "kickass book that defies the genre it's in", Allie writes with a prose that has been labeled poetic and ethereal. Her life is a beautiful disaster, flowered with the harrowing existence of inherited eccentricity, a murderous family history, a faithful literature addiction, and the intricate darkness of true love. These are the enchanting experiences that inspire Allie's fairytales. From some coffee shop in Los Angeles, she is working on her next novel.