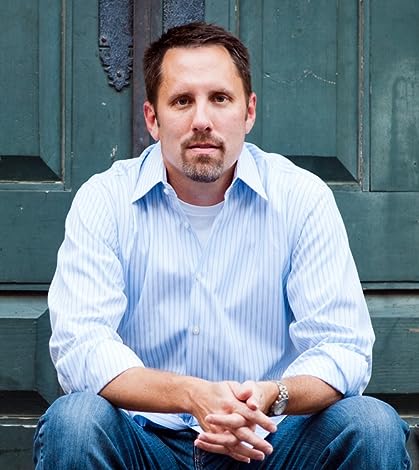 What scares you the most?
When I was young I’d have a repetitive dream about my family being kidnapped by a throng of muscular, bearded Vikings. They’d be taken down the secret dungeon under our house and tied up. I could literally feel my body tense up, even though I was in a dream state. As the dream typically played out, I’d somehow burst into the room, race down the staircase and save everyone—all at the age of ten. I always woke up scared as hell, but also happy that it was just a dream.

You might wonder why I dreamed about Vikings. Comically, my little league football and baseball teams were nicknamed the Vikings. And they were some of the coolest experiences of my young life. Dreams are a strange world to analyze.

What makes you happiest?
A vacation day on the beach with my family. Seagulls swoop down over the kids, who are diving into waves. Maybe one of them is carving out a sand statue or moat. My wife is usually reading. I read a little and observe, and usually take a jog down the beach to the levee and back. Through it all, I realize I’m the luckiest guy on the planet.

Outside of the family bonding, the single most fulfilling activity I’ve ever attempted is writing novels. This comes from a guy who is active and loves all sports. But developing a story that takes the reader on the ride of a lifetime—that’s one of the best gifts I can ever receive.

What’s your greatest character strength?
I have to say I’m a pretty loyal person, to people and to causes. My wife would say (actually she just said it) that my greatest strength and weakness is my drive for perfection. I can’t imagine where she got that from? I don’t have time to think about it either. I’ve got to get back to my fiftieth re-write of my latest book.:)

Why do you write?
To breathe. To live. And to improve. It’s built into my DNA. If I give a rat’s a$$ about something, my mind constantly churns around how I can continue to evolve, especially in every facet of the writing profession. I think it’s safe to admit that I’m at an age when I’m not going to be “discovered” by the Dallas Cowboys, Mavericks or Rangers. But with writing, I can keep striving to reach the next level. My goal is to create pieces of work that are more compelling each time I tap the keyboard.

Have you always enjoyed writing?
In the fourth grade I wrote a story about my mom. When she was a young child she watched in disbelief as her beloved dog was hit and killed by a car. My teacher read my story out loud to the class, and she got a tear in her eye. Watching her feel that emotion from the words I wrote on paper was a profound moment for me. The best thing about that assignment was the freedom my teacher gave me to write the best story I could, with few parameters or limitations.

Unfortunately, I recall most of the rest of my schooling to be so structured it literally sucked the creativity right out of me, and I eventually began to see myself as anything but a writer. And then came the creation of the computer. Re-typing, editing, cutting and pasting...all of the wonderful nearly instant capabilities of using a word processor ignited a spark inside my brain that was always moving at lightning speed. The computer, and what I could do with it, finally was able to keep up with the ideas darting around in my head. I then began developing as a storyteller and as a writer. And the rest…is history.

What motivates you to write?
I write because I have to, if I want to feel all that life has to offer. Like most things I do, I’m motivated by my desire to improve every time I sit down, take in a deep breath and dive into my imagination. I want the next chapter to be more impactful than the previous, the next book to connect more with the reader than the last. I’ve always been that way about everything I do. It’s just how I’m wired, I guess.

What writing are you most proud of?
Actually, it’s the most recent set of chapters I’ve written in book 4 of the Greed series, (title TBD). I thought WICKED GREED (Greed Series #3) knocked it out of the park. Well, so far with book 4, I’m on pace to break the author home run record—without steroids.

Behind the façade of every corporate takeover executives pull levers this way and that, squeezing the last profitable nickel out of the deal. But no one knows the true intent of every so-called merger. No one knows the secret bonds that exist. An Indian technology giant swallows up another private company that has deep roots in North Texas. For one unassuming man the thought of layoffs, of losing his own job to a bunch of arrogant assholes feels like a kick to the jewels. Until the day Michael's life changes forever.   Perverse alliances. An affair of the heart. A grisly murder. A spiraling string of events thrusts Michael into a life-or-death fight to save a tortured soul and hunt down a brutal killer...one who lurks closer than he ever imagined. Greed knows no boundaries.

Thank you for the interview, Andrea! I haven't thought about Vikings in many years.:)