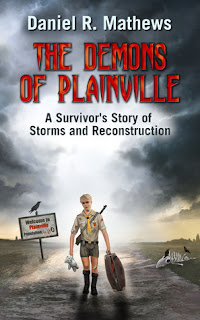 Some true stories read like fiction, but for those who have to personally live through the experiences, the nightmare is vividly real. Daniel R. Mathews digs into the darkness of his past with his haunting memoir, The Demons of Plainville.


As a child, Daniel struggles to find his footing in an upside-down world. His mother is mentally ill and addicted to drugs; she performs black masses to summon demons, is physically abusive, and plays brutal mind games that make him doubt his sanity and despair of ever making sense of life or himself. Even his father beats Daniel after "rescuing" him from his mother. Thanks to a few unexpected friends, Daniel survives his devastating youth and emerges stronger for it.

But Daniel's battles aren't over. Finally free of his abusive parents, he now must face himself and wrestle with his sexual identity in a community that sees nothing wrong with homophobia.

Candid and compelling, this is a triumphant tale of a young man who walked through the darkness, bravely faced his demons, and against all odds carried the faint light of hope with him every step of the way.
Amazon Kindle

An avid reader of science fiction, horror, and fantasy, Daniel R. Mathews is a novelist and nonfiction writer whose books feature LGBT youth braving danger with honor and dignity, including his personal memoir, The Demons of Plainville, and debut horror novel, The Unseen Kingdom.

For the past two decades, Mathews has worked as a Federal Aviation Administration (FAA) certified ground instructor, meteorologist, and a member of the web development and Internet technical support community. He currently lives in Flagstaff, Arizona.

I have spent the bulk of my life doing PHP & MySQL development, along with internet technical support. However, I'd always gravitated toward any excuse to write. It was only recently that dissatisfaction prompted me to make significant changes to my life and start a formal writing career.

Please check out my memoir: 'The Demons of Plainville: A Survivor's Story of Storms and Reconstruction' to get a better understanding of where I've been and why I am compelled to write. 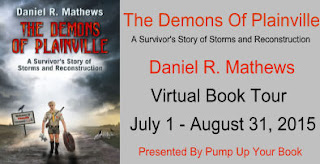 My Review
Crazy people don't know their crazy. Unfortunately, the same applies for stupid people. And that best describes the author's mother who is at the centre of this memoir. Reading this memoir made my blood boil. Parents are given gifts when they are given children. To then abuse, destroy and have no concern for this gift shows there is something wrong with the parent, not the child.

I salute Daniel R. Mathews for having the strength to pen down his past and to share it with the world. As with many memoirs, I know some people who will find negative points about his life story. But I say, before you criticise the author for sharing his story, pay close attention to what he is actually saying. The abuse he suffered at the hands of his mother was not his doing.

This is a story of a boy who became a man despite having the adults in his life let him down. Sharing his story lends hope to others who are or have been in his situation. A well-written memoir that will make you appreciate every moment of your life.

Would I recommend this read? Definitely. While some parts of the memoir may contain details that could trigger other child abuse survivors, I do recommend reading this memoir to understand the long-term affects of child abuse.

Email ThisBlogThis!Share to TwitterShare to FacebookShare to Pinterest
Labels: #BookReview, Daniel R. Mathews, Pump Up Your Book, The Demons of Plainville