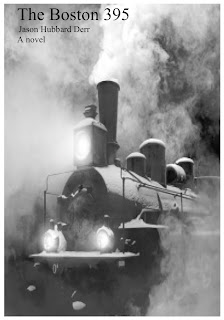 Now, age 25, he lives on his mother’s couch, in debt and brokenhearted. All of that changes when The Boston 395 train line appears in his living room. The Boston 395 is like no train you have ever seen. Each stop exits into James’ life, revealing truths he would rather not deal with. Guided by The Conductor and populated by a colorful cast of characters, The Boston 395 will take James - and the reader - to places they never expected.

THE BOSTON 395 is a novella, sitting in the literary arena of magical realism/fantasy. The book follows its own rules and weaves an interesting world for the reader to get lost in, and to wrestle with.

Email ThisBlogThis!Share to TwitterShare to FacebookShare to Pinterest
Labels: B