I have conducted interviews and now it’s my turn in the hot seat! I am to be interviewed now, that my book Night School: Vampire Hunter is on tour… I will say I am nervous by all of this! So to help me out, Angel, from Night School Vampire Hunter says she will show me how it’s done:) So, why don’t we go see what she has to say! Thanks all for joining us:)

Me: Angel, I am so glad that you are joining me and helping me out today:)
Angel: Oh, no problem:)

Me: I wanted to first start with the question, how does it feel to have an entire book written about you and your experiences? Now that the book’s going on tour, that will be even more eyes on you?
Angel: It was weird at first, so many people talking about well… I don’t know my life. I mean… I was just trying to keep myself and my brother alive, (you know…Vamps can be hazardous…); trying to be a normal kid, when all of a sudden, I have an audience! But its okay, everyone has been pretty cool, so I’m getting used to it.

Me: I can only imagine…wow...okay, next question…Have you always known that you were this phenomenal, wicked, Vamp Hunter, and that with your special essence, it’s believed, you are destined to change the human and supernatural world forever!..(Um, take your time with that one:)
Angel: Okay, wow…you just put that one right out there huh? Um, no… I didn’t know that I was to be the key in some type of apocalyptic, battle with mankind…thought I was just a normal kid that had luck that sucks…But the perks are awesome!…now that I am trained, I’m getting faster and stronger and learning more moves…I can even take on Ismet..

Me: For our readers, now who is Ismet again? And also how do you get along with the other girls?
Angel: Ismet is one kick butt Jinn (Genie), she’s not from some bottle that crosses her arms and blinks on command; She is from an old race of beings that evolved from Fire…they are the protectors of the Divide…
Me: The Divide?
Angel: Yep, I just learned about all of this too…the Divide is the barrier between the supernatural world (unseen to us) and ours. Ismet was one of the greatest warriors amongst her people...
Me: How did she end up at Ame’ Academy? There must have been a great threat to warrant such a fighter to be here???
Angel: It was. Me.
Me: Oh…okay…well, how about my second question, do you get along with the other girls? I believe you all have made somewhat of a team, correct?
Angel: We’re a team now, but at first…I wasn’t sure… I’ve always liked Elin (she’s half Vampire/half Human) the sweetest kid you’ll ever meet, unless you threatened someone she loves…then wow, she’s scary…and I already told you about Ismet, I have much respect for her mad skills:)

Me: And?
Angel: (Sigh)…and yep, there’s Belladonna, a stuck up Natural- Born Vamp that I am surprised I haven’t staked yet!

Me: Is it the fact you’re a Hunter and she’s a Vampire? Even though, the Natural-Born Vamps pose no threat to Humans?
Angel: No, it’s from the fact she’s a snob, and always trying to give me a makeover!

Me: Lol….well, I’m sure ALL of you make a great team, you are really cleaning up Kincaid Texas:)…but aren’t you’re leaving out someone….Rafael? What IS your relationship with him? Rafael
Angel:O-o-o-kay…didn’t think you would bring HIM up! Well, he’s just RAF…he’s my friend...He sort of just showed up at Ame, and well that’s when things got really weird! Then things got really bad…dark, and when I didn’t think I had anyone, well Raf was there…

Me: Fair enough, thanks for the interview!
Angel: See, not so bad right? Even though, you threw in some tough questions!

Me: Lol, well, you’re a good sport! I guess will wrap this up…see you around Ame’ Academy:)
Angel: Yep, me and all the other creatures of the night!:) Lol! 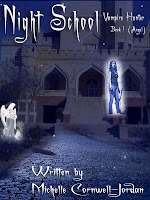