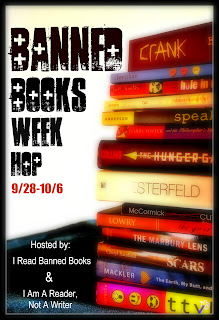 My giveaway is 5 copies of  Lady Chatterley's Lover

Lady Chatterley's Lover is a novel by D. H. Lawrence, first published in 1928. The first edition was printed privately in Florence, Italy, with assistance from Pino Orioli; an unexpurgated edition could not be published openly in the United Kingdom until 1960. (A private edition was issued by Inky Stephensen's Mandrake Press in 1929.) The book soon became notorious for its story of the physical relationship between a working-class man and an upper-class woman, its explicit descriptions of sex, and its use of then-unprintable words.

*Random winner will be picked and emailed on 10th October 2012

*This giveaway hop is hosted by I Am A Reader Not A Writer and I Read Banned Books
at 18:00

Email ThisBlogThis!Share to TwitterShare to FacebookShare to Pinterest
Labels: B

I follow via Twitter:@Nursebunny95 and via GoodReads: Amanda Ray

I am a GFC follower as dreamer616. Thank you for the giveaway!

GFC follower - Alicia B (omitting the rest of my last name in the comment).

Thanks for having the giveaway!

I am a GFC follower as mel brock.
Thank you for the giveaway!
melorabrock {ay} gmail {dot} com

GFC Deranged Pegasus
derangedpegasus@gmail.com
Thank you for this chance to win.

Thank you for the chance to win! :)

Thanks for the the giveaway!