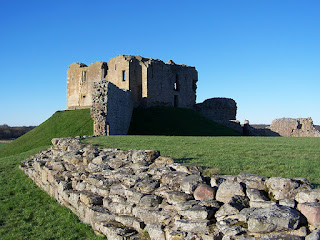 There are all kinds of research to write historical fiction or fiction. You have to read books, dozens of them. Or hundreds. You need to know everything from how they dressed to how they bathed to what weapons they used, and if you get it wrong, boy do you hear about it. But there are some things you can’t get from a book.

For that you have to visit the country you’re writing about.

Almost all of Freedom’s Sword is set in the north of Scotland in an area called The Black Isle. Now don’t ask me why it’s called that since it’s neither an isle nor black. It’s beautiful, edging on an arm of the North Sea called the Firth of Forth. Hill and even today somewhat remote, it is where the fight for Scottish independence began at Avoch Castle. The Castle is not even a ruin now. Only a stone cairn and a Saltire flies to commemorate the day Andrew de Moray raised the flag of Scottish defiance over his father’s castle. 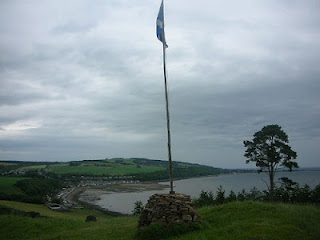 But it’s easy to romanticize it. Instead I want to bring it alive for the reader. Only walking over the hills where they marched and fought, could I feel the things that they did. The spicy smell of the gorse and the scratch of its leaves. The stinging bite of the midges that swarm your neck. The scent of the sea air as it blows in from the firth. The stink of fish brought in from the sea. The frigid water of the River Spey as you splash across. Heather turning a blood red on gray cliffs in the cold autumn rain.

Few of the castles that Andrew de Moray took back from the conquering English stand as they did in his day. The Scots destroyed them to keep them from enemy hands. Even the ruins of Castle Duffus are ruins of a later age after it was re-built. But climbing the hill to where the ruins stand gives an idea of what the battle must have been like to take it back. And then Andrew de Moray burned it.

And there I turn to imagination. Duffus Castle was built his family and what must if have felt like to burn it? To destroy your own lands and castles? To have been driven to such desperation?

Writing historical fiction is fun for exactly that reason. No other genre gives such a mix of things to work with. You study the history. You study the land. You mix it with your own dreams. And hopefully, you share them with readers.