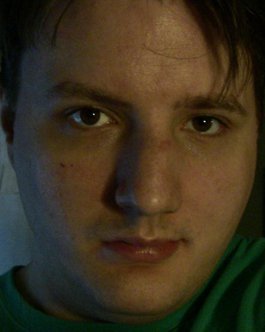 Q: What first got you into writing?
A: My third grade teacher. She had the students write a short story for class credit. Well, it was love at first sight for me. Ever since I could not stop telling tales. I've always had an affinity for horror/scary stories. I don't know why horror over everything else. Maybe because I was (and am) afraid a lot of things. Death, flying, crowds, public speaking, being a few.

Q: Tell us a little bit about your writing routine.
A: I usually don't write till late in the night. And I mean late. I'm talking from 2 to 3 in the morning. That's when I get most of my energy. That's when my mind's freshest. There are times though when I right in the evenings. Five, six o' clock. Mornings are a bad time for me. I stay up most nights, so I'm definitely not a morning person. Other than that, I'll write for thirty minutes to an hour or more. It just depends on whether the ideas are flowing or if I don't have the creative UMPH. Sometimes the story writes itself; other times everything's forced. I don't think it's good to write when it's very forced.

Q: What do you like to do besides writing?
A: Recently, I took up playing guitar and singing. I'm not good at either! At least not yet, anyway. I know that practice makes perfect, and one can only improve with practice. I also like to work out, box, and do MMA. Reading and watching movies has always been something I really enjoyed.

Q: Tell us a little about your novel, Imaginary Friend.
A: I've had the idea for a long time. If you can imagine Stephen King's “Carrie” having an imaginary friend, this would be the result. A little boy named Nathan Stevenson lives a very rough life. His father beats him. Kids pick on him. His mother's a crackhead. His only salvation is his imagination. His only real friend isn't real. One night, while his father is abusing him, Nathan basically says WHEN. That's when all hell breaks loose. He believes his friend to life. Max, the heroic monster he created within his mind, goes on a killing spree. It's a very brutal story, and no punches are held back. If you like stories about the underdog who gets his revenge on his foes, look no further, I promise you.

Q: Do you have any other novels in the works?
A: Plenty. I'm actually branching out into drama and coming-of-age-type stuff. Horror will always be my forte, and I'll never stop writing it. But I really don't want to stick to one genre forever. I'll just keep writing and see where it leads me. That's all I can do :)

The apostles said to Jesus, “Make our faith greater.” Jesus answered, “If you had faith as big as a mustard seed, you can say to this mulberry tree, 'Pull yourself up by the roots and plant yourself in the sea!' and it would obey you.”

Tulpa: a materialized thought that has taken physical form.

Eight-year-old Nathan Stevenson is beat by his father, teased by his peers, and has zero friends—except Max, his imaginary friend. Max is a heroic creature he created years ago when the physical abuse became too much to bear. Strangely, every time Nathan imagines him, he becomes more lifelike, more substantial... but nobody could guess what soon happens when Nathan refuses to be a victim anymore.

The barriers of reality break down, and Max becomes real. Only Nathan can see him, but anyone can feel his violent wrath. The monster slays anyone who gets in his creator's path, and eats the hearts of his casualties in order to obtain strength. There's only one question: can Nathan learn to control his Tulpa? Or will it break free from his mental restraints to do whatever it desires? Either way, there will be a lot of dead bodies to clean up!

Author's Note:
This paranormal/splatterpunk horror novel, Imaginary Friend, has been updated with a new cover and has been reedited for a more soothing read. It also contains elements of science fiction and fantasy, but the information about "Tulpas" are based on fact. For adults only!