#AmWatching - The Secret in Their Eyes (starring Ricardo Darín) 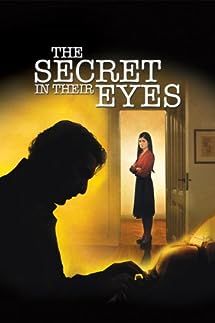 The Secret in Their Eyes

Watch in HD on supported devices

Recently retired criminal court investigator Benjamin (Ricardo Darin), decides to write a novel based on a twenty-five year old unresolved rape and murder case, which still haunts him. His search for the truth will put him at the center of a judicial nightmare, as the mystery of the heinous crime ...

In 1999, retired Argentinian federal justice agent Benjamín Espósito is writing a novel, using an old closed case as the source material. That case is the brutal rape and murder of Liliana Coloto. In addition to seeing the extreme grief of the victim's husband Ricardo Morales, Benjamín, his assistant Pablo Sandoval, and newly hired department chief Irene Menéndez-Hastings were personally affected by the case as Benjamín and Pablo tracked the killer, hence the reason why the unsatisfactory ending to the case has always bothered him. Despite the department already having two other suspects, Benjamín and Pablo ultimately were certain that a man named Isidoro Gómez is the real killer. Although he is aware that historical accuracy is not paramount for the novel, the process of revisiting the case is more an issue of closure for him. He tries to speak to the key players in the case, most specifically Irene, who still works in the justice department and who he has always been attracted to but never pursued due to the differences in their ages and social classes. The other issue is that Gómez is still at large, no one aware if he is alive or dead. But as Pablo at the time mentioned that passion is one thing that cannot be changed in behavior, Benjamín learns now that that premise still holds true.
- Written by Huggo