FROM AUNTY IVY TO KHUBILAI KHAN

She once told my mother at a parent interview: “Your son is a complete dreamer. He’ll never amount to anything in this life.”

I still think that was a harsh judgment on a seven year old. But she was right, of course, I was a dreamer.

It was my greatest asset.

It was about the time I first read Jules Verne’s Michael Strogoff. To get my hands on it, I had to endure a slobbery wet kiss from my Aunty Ivy, but I considered it well worth it.

By the end of that first afternoon, I was hooked on classic literature.

Every week my Aunty Ivy took the train down from London to visit with us in (what was then) rural Essex, to have ‘a nice cup of tea’ with my mother. She brought with her a collection of Classics Illustrated comics. She must have picked them up in the markets in London.

There were some Beanos and Victors mixed in, but I threw them out. My treasure was the cartoon versions of some of the world’s greatest literature.

I read all of Jules Verne in an afternoon.

And so began my love affair with literature. By the time I was eight I had read Moby Dick, Doctor Jekyl and Mister Hyde, The Moonstone, The Black Tulip and Ivanhoe, was familiar with most of the major works of Alexandre Dumas (Père), Mark Twain and William Wilkie Collins and had even read most of Homer’s Odyssey (although I never found out how it ended because the last page had been ripped out.) 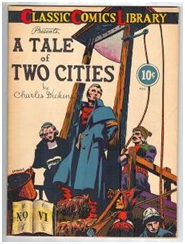 I don’t think that back then Aunty Ivy knew she was giving me primers for my future career, for no one in my family had ever used their hands for doing anything other than making pies or fixing corner cupboards.

But those comic books were vital to me. I was an only child and though not particularly bookish – I was then, and still am, a soccer tragic – it nurtured in me a thirst for great stories painted on broad canvas.

So Aunty Ivy did not just give me the gift of something to read when it was raining too hard to play football.

Classics Illustrated stirred my nascent imagination and at the same time gave me an undying thirst for travel and for adventure.

These little gems of comics also made me want to time travel, because many of the places I was reading about no longer existed.

The only way I could revisit them was to recreate them in my head. Imagining them onto a page was the next logical step.

When I left school the first thing I did, to the consternation of both my parents, was to go hitch-hiking around Europe.

After all, why go to university? I’d read The Iliad and everything Shakespeare ever wrote by the time I was eight.

What could there possibly be left to learn?

After Europe I headed down to Morocco, where me and my mate were the only white faces (then) wandering the Djema El-fna’a, the Place of the Dead, in Marrakech.

Not too long after that I found myself in the middle of a typhoon in the South Java Sea, and wandering the Golden Triangle of Burma, shaking hands with CIA agents and drug smugglers. Every one of those experiences led to a book a few years later.

If I’m lucky, one day they’ll make one of my books into a comic.

But for now, I just want to say thank you, Aunty Ivy and Classics Illustrated. And wherever she is in heaven, I hope the angels are making her a nice cup of tea.

Email ThisBlogThis!Share to TwitterShare to FacebookShare to Pinterest
Labels: C, I