He was dozing, listening to Tammy’s heavy breathing as she slept sprawled on the bed naked beside him. He reached over, pulled the blanket over her, and started to reach for her again. Then he sat up, grabbing his watch. Jesus, the time. His head ached, and he remembered the bottle they’d opened as they sat on the bed together. It still stood on the side table, almost empty, a testimony to their partying. He fumbled for his jeans and boots. “Gotta get outta here,” he mumbled as he opened the door and stepped into the cool night air. God, he felt fuzzy. He shook his head as he walked unsteadily toward the van. The hoofs were beating a steady tattoo on the siding. It sounded like the horse would break right through it. At the side of the café, he saw a long hose stretched out to a tiny clump of half-dead flowers. He turned it on full blast and showered it over his own head. Shaking himself, he wiped his eyes and swore again at the thunderous sound coming from the van. Reaching the side of the trailer, he jerked open the tiny vent window above the horse. He trained the powerful jet through the opening, drenching the horse, pummeling his face with the full force of the water until he stood shuddering, at last subdued.

“How’d ya like that, ya bastard? Ya want some more, or are ya gonna shut up?” He poked the hose in again and doused the animal once more. Then he carefully reached in and untied the rope that secured him in the van. “Don’t care if ya pitch clear across to the other side,” he snarled. “Maybe that’ll shut ya up. Where you’re goin’, don’t matter if all your legs is broke.” It was as if the two were fighting a personal battle now, and he was going to show that Hammer Head who was boss.

Buddy slammed into the truck’s cab, and the engine roared to life. He jerked into gear and pulled out onto the highway, blinking his eyes in the darkness. He kicked the headlights onto high beam. God, it was dark. He felt sleepy, still fuzzy from the cheap booze, and his mouth felt like the bottom of a birdcage. “Should’ve brought some water,” he muttered. “Should’ve watered the horses, fed ’em, too.” Hell, he’d watered old Hammer Head good enough, and for once he was quiet back there. He squinted at the road, watching for the turnoff for the shortcut he planned to take.

Up ahead to the right, a small road left the highway and climbed into the hills. The truck bumped and lurched when he made the turn, and the horses in the back sounded their disapproval. Never much traffic on this road, he consoled himself. I’ll make up time. He accelerated, and the truck sped down the center of the road through the blackness. Sharp turns and the steep, steady incline slowed his progress. “Gotta go faster,” he muttered. Then he heard the thumping, pawing commence again, and he lurched into the steering wheel, cracking his already bruised ribs. “Started up again, goddamn,” he growled. That endless pounding hurt his already aching head. It sounded like a thunderous roar. He had to shut that nag up. He pressed the accelerator to the floor, and the truck surged ahead. Then he braced himself as he slammed on the brakes. He heard the horse pitch again into the side of the van. He grinned as he repeatedly accelerated and braked until he heard the horse’s cry of pain as he slammed back and forth in the van. “Don’t care if I break your fuckin’ legs,” he shouted back at him.

The truck had been climbing steadily, and at the crest of the hill, Buddy accelerated again. “Goddamn it, I’ll show you, Hammer Head. You wanna play? Let’s play.” He jammed the accelerator down harder, and the truck raced down the hill. Buddy clutched the wheel, trying to control the catapulting vehicle, but the curving road and the van’s speed sent the truck careening against the opposite embankment. Buddy never saw the approaching car until their fenders smashed together and locked. In one instant, the two shot out over the cliff and crashed to the bottom of the ravine. Buddy’s head split like a pumpkin as he hit the windshield, and the last sound he heard before losing consciousness was the piercing shriek of the horse, a high shrill neigh, not of terror but of defiance. Then there was only dust and tangled steel engulfed in flames. The entire gorge reeked with the stench of burning horseflesh. 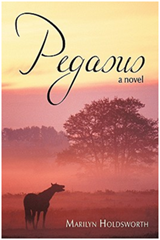 Connect with Marilyn Holdsworth on GoodReads