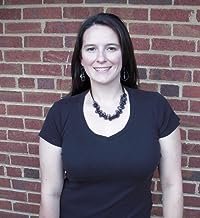 Tell us a bit about your family.

-I am the youngest of three girls. My older sisters Kellie and Angela are 5 and 2.5 years older than me respectively. We grew up in Springfield, Virginia which is just south of Washington, DC. They live in Richmond and Raleigh. My awesome parents, Jamie and Sandy, still live in the house I grew up in. A couple years back I bought a house that is about 8 minutes away, so needless to say I still see them all the time. As a whole, our family is pretty close knit. I try to see my sisters and my three nieces as often as I can, which can be difficult with them out of town.

My husband, Vladimir, and I dated for about 5 years before tying the knot in June of 2013. As I often tell him, he’s my favorite person. We have a great little household, no kids, no pets as of yet.

-I have a really amazing support system by way of my friends and husband, Vlad. When I’m at my most defeated, Vlad often tells me “it doesn’t matter.” Its sounds strange, but when he reminds me that my success, or lack of, has no bearing on his love for me or his belief in me, it puts everything in perspective. I can focus on doing what I want rather than worrying about the outcome.

What scares you the most?

-I have a huge fear of home break-ins. When I was young, my parents accidentally left the garage door open overnight. Some kids came in and took stuff, which wasn’t a huge deal (most of it was later found), but what really shook me was seeing the cops finger print the door that led to our house. That too had been unlocked, but thankfully they didn’t come inside. Ever since I think every noise I hear at night is someone trying to get in. Even when I lived on the 4th floor, I was certain someone would climb up the tree and try to jump through my window.

What makes you happiest?

-Sleeping in on the weekends with my husband followed by a fresh cup of coffee and pancakes. It’s the little things.

-It may be as much a weakness as a strength, but I’ve always taken pride in the fact that I’m willing to try new projects and throw myself into them wholeheartedly. I look at something and go “I could totally do that,” then I try it. It’s a good and bad thing because I’m taking risks, but I’m also accumulating tons of crap from things I figured out I didn’t like or wasn’t good at. My poor husband is such a sport for putting up with it all.