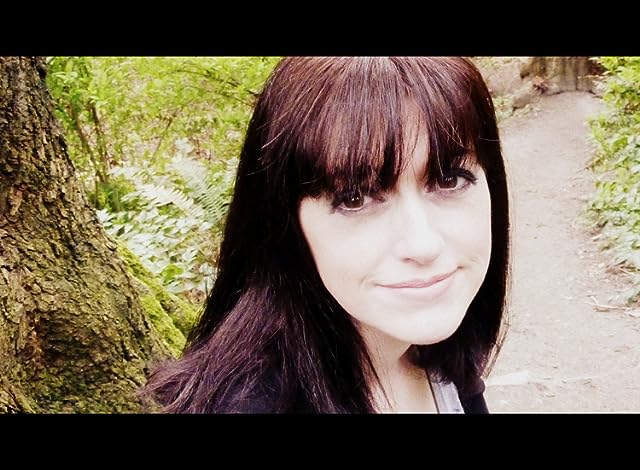 WHAT MAKES ME HAPPIEST?

I live in Seattle and am mother to two rambunctious children, so I’d have to say sunshine and solitude followed by a cup of peppermint tea, a cat curled up on my lap and a good book to read.

That would have to be impatience, for sure. Parenthood is one of the great sculptors of life, however, and through my children, I am learning to be a more patient person.

WHY DO YOU WRITE?

When I first tried to answer this question, I wrote simply, “I string words like Christmas lights to create stories because I must.” Then I worried this might sound a little pretentious. Writing, for me, is a compulsion. Words well up inside me like melodies and, just like a musician, I must write them down.

WHAT BOOKS DID YOU LOVE GROWING UP?

Aside from an unfailing devotion to fairy tales and mythology, I read Laura Ingalls Wilder’s Little House on the Prairie series multiple times and went through a serious Trixie Belden phase in 6th grade. I loved Frances Hodgson Burnett’s A Little Princess and The Secret Garden and C.S. Lewis’ The Chronicles of Narnia. I was also a huge fan of L.M. Montgomery’s Anne of Green Gables series. And I cannot forget Roald Dahl’s James and the Giant Peach and Scott O’Dell’s Island of the Blue Dolphins.

HAVE YOU ALWAYS ENJOYED WRITING?

Tale-spinning and journaling were hobbies of mine from early on, but I didn’t realize how much I enjoyed writing until I became a college student. When I found myself actually relishing the challenge of the dreaded essay exams, I suspected something was up. But it wasn’t until a professor told me I had a gift for writing that all was revealed and I remain eternally grateful to him for this. When we take the time to recognize gifts in others, we may never realize just how great an impact it might have. One simple compliment could expose a previously hidden world for the recipient.

LOCATION AND LIFE EXPERIENCES CAN REALLY INFLUENCE WRITING; TELL US WHERE YOU GREW UP AND WHERE YOU NOW LIVE?

I spent the first ten years of my life in southern California. My little family of four lived in a large rambler at the end of a dead end street on the outskirts of a small town. We had a swimming pool, a large garden, a chicken coop and citrus trees. In our backyard, there was a rickety wood bridge to a tiny island planted with plum trees, the perfect spot for peeling and eating fresh tangerines. There were avocado groves up the street and our neighbors ran a cactus farm. My younger sister and I ran around barefoot and sun-kissed in those early years. When we moved to Seattle just before my tenth birthday, I was plunged into a greener, grayer world of forests and moss, snow-capped mountains and driftwood-covered beaches… and rain. Although I miss the idyllic days of my Californian childhood, I have grown to love and appreciate the Pacific Northwest. What we lose in the drizzle, we make up for with the most spectacular summers. And it is this study in contrasts between one home and the next - the light and the darkness, the warmth and the chill, the above and below – that has definitely influenced me as a writer.

DO YOU PLAN TO PUBLISH MORE BOOKS?

I’m already working on a sequel to Echo in the Underworld and it is possible it may evolve into a trilogy. Beyond that, I often jot down ideas for new stories. I have a futuristic story that I’d very much like to get written down, but it remains on the back burner while I continue to work on Echo.

WHAT OTHER JOBS HAVE YOU HAD IN YOUR LIFE?

I’ve scooped ice cream at a parlor, sold greeting cards at a gift shop, sliced bread at a bakery, controlled the chaos at a childcare facility, handed back correct change at a drug store, paid people’s bills by phone at a large (and now defunct) bank and then tracked down said payments when they went missing. I’ve tracked down customs document information for international packages and managed programming at a television station. And for the past decade, I have held the title of Mother – the most challenging job of them all.

IF YOU COULD STUDY ANY JOB AT UNIVERSITY, WHAT WOULD YOU PICK?

In a heartbeat, I would have to go with the study of folklore, mythology and oral story-telling traditions around the world. So many of the stories and fairy tales we love today are essentially psychological time capsules from an earlier age, snapshots of human hopes and fears that somehow still resonate in a modern age.

IF YOU COULD LIVE ANYWHERE IN THE WORLD, WHERE WOULD IT BE?

The closest thing to heaven on earth must be Vernazza, a tiny town in the beautiful Cinque Terre, a string of five villages clustered along the steep coastline on the west coast of Italy. Pastel-colored buildings perched above a restless blue sea, palm trees, potted lemon trees, terraced vineyards and a lookout tower for pirates – a fairy tale village come to life. I can picture myself sitting at an old-fashioned typewriter, pausing in the midst of writing my magnum opus to stare out the open window at the colorful fishing boats bobbing in the harbor. And there would be gelato. Lots of gelato. And did I mention the pesto? Like I said, heaven on earth.

These days, the majority of my writing takes place on my lap top while sitting at my kitchen table. However, I do occasionally take my laptop to coffee shops, bookstores or the library. Sometimes it helps me to focus when I’m away from my house and all of the demands that go with it. And to satisfy my inner Luddite, I still keep a handwritten journal, plus various notebooks scattered about the house for random thoughts and quotes that catch my fancy.

IF YOU COULD HAVE A DINNER PARTY AND INVITE ANYONE, DEAD OR ALIVE, WHO WOULD YOU ASK?

Jane Austen – “My idea of good company is the company of clever, well-informed people who have a great deal of conversation; that is what I call good company.” Yes, the woman who wrote this would be the perfect dinner guest. As an added bonus, I could get the inside scoop on all the other masterpieces she meant to write.

C.S. Lewis - because he was brilliant and had a childlike imagination and because I’m a Narnia fan girl.

Oscar Wilde - “When Oscar Wilde was asked in an interview to list his 100 favorite books he said he could not. When asked why, he replied, 'Because I have only written five.” Not sure where this quote originated from, but it’s reason enough for me!

David Sedaris – one of a handful of authors whose books make me laugh out loud. Plus, can you imagine a dinner party with Oscar Wilde AND David Sedaris? OMG. Fabulous!

The Brothers Grimm – these two men had possibly the coolest jobs ever: Fairy Tale Collectors. And so many of the original versions of the shiny happy stories we know today were actually, ahem, downright grim. You need a touch of darkness, magic and mystery at the dinner table to act as a counterbalance to all the wit being slung about by the Austen / Wilde / Sedaris trio. Also, I suspect C.S. Lewis would be enthralled.

Email ThisBlogThis!Share to TwitterShare to FacebookShare to Pinterest
Labels: B, Brietta Tatro, E

Can I come to dinner?

Can I come to dinner?