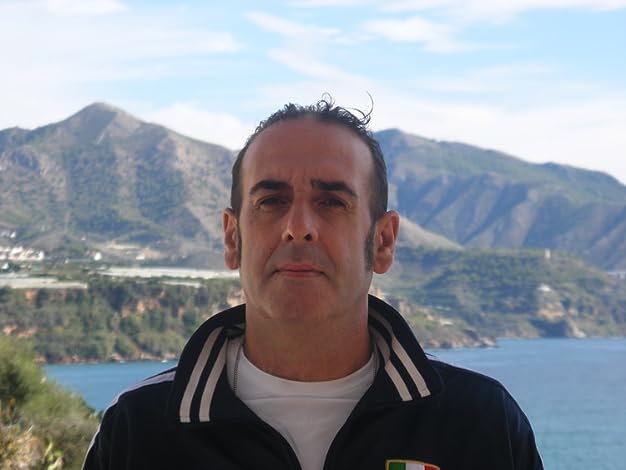 Tell us a bit about your family.
I live with my girlfriend Marina, and her son Jamie. Marina does all of my marketing, publishing, and runs my web site, leaving me free to write!
How do you work through self-doubts and fear?
Like all writers I have doubts that what I’m writing is not good enough. The writing doesn’t flow…the list is endless. But I continue writing and do my best to ignore the inner fear. I think it was Stephen King who said, write faster than your doubts, or something similar.
What scares you the most?
Not being able to write anymore. It has been my lifelong dream to write, I am now living my dream. For me now, not writing would be living a nightmare!
What makes you happiest?
Living the life that I want to live, which is writing.
What books did you love growing up?
I was a late-comer to reading. I found my love of reading after I left school, the first book that I ever read was the Bible.
How closely are your books based on your own experiences?
Almost completely. The reason I decided they should be labelled as fiction is that I didn't want to be going crazy because I couldn't remember things accurately. Also, since I may write more of them, I wanted the freedom to play around with reality to make the stories what I want them to be.
From its opening line—“Song thrushes and black birds’ eggs are the easiest to start your collection with,” said Reggie. - I expected the book to be more like a collection of stories about childhood antics in the countryside, but the majority of the stories are about adulthood. Is that partly to communicate the idea that a sense of place is really about identity?
The first few stories are from childhood and are setting the scene for incidents that happen in subsequent stories once Ray Dennis is older. The person we become as an adult is shaped by childhood experiences, so I suppose these first few stories are about identity. The next line of that story is: “In my South-east London School, Reggie Boniface was a little unusual. He didn’t do drugs. Never mentioned girls he fancied. Avoided violence, didn’t like sport, and studied hard. He was someone who I never dealt with, but he used to fascinate me nonetheless.” So I am really interested in how a person is shaped by experience.
When you look at Ray in the book, how much of him is still with you?
A little too much for my liking. I don't feel like I grew up very effectively. I didn’t grow up with any constant role models, so I found out about life the hard way, making unnecessary mistakes. I drifted from country to country, place to place, and job to job, always feeling like an outsider, looking for something. However, unlike Ray I do not drink or smoke anymore.

For the first time ever, this collection of short stories by Gary Troia brings together, in chronological order stories and memoirs from Spanish Yarns and Beyond, English Yarns and Beyond and A Bricklayer’s Tales into one complete volume.
"Excellent! A collection of short stories about depression, alcoholism and drug use. Very compelling reading. I read this short story collection all in one go." (Maria, Goodreads.)
A Bricklayer's Tales is the ultimate "I hate this job" story, written as a collection of short stories and memoirs, each one revealing a snapshot in the life of Ray. Troia captures the tedium of working in a low paid, menial job and living hand to mouth. This book of short stories is sad and questions the reader to ask questions about their own life. This book achieves clarity without trying.
Ray has three expensive hobbies: drinking, drugs, and running away. Without the income that Bricklaying provides, he would not be able to maintain his chosen lifestyle, so he compromises his principles and continues with his trade.
A collection of short stories and memoirs that include:
The Cuckoo's Egg. Boyhood antics lead to tragedy.
My Grandfather's Shed. The making of an English key
No Comb on the Cock. Gypsies, champion fighting cocks, and career choices.
What I Did In My Summer Holidays In 1000 Words. Could having an idea ever be considered a criminal act?
My Best Mate’s Head. Did a weekend of boozing save Ray from certain death?
The Shetland Isles. A trip to sunny Benidorm, a chance meeting with some Glaswegians, and a cold, miserable job in Lerwick.
Pointing a House in Islington. Too much alcohol and cocaine don't mix well on building sites!
Angel Dust. The peculiar story of a man whose new life in America leads to conversations with Ancient Greek philosophers
Peyote. Hippies, LSD and an idyllic refuge
Return Ticket. Handcuffed and ready for deportation. A sad departure from the States
When I Joined a Cult. Sober dating as Ray discovers religion.
Bilbao. How very, very English!
Teaching Other People. The grass is always greener-the escape from bricklaying.
A Week in the Life of Ray Dennis. With the prospect of no money for food or alcohol this Christmas, Ray has to find work quickly.
Catania. A meeting with a Sicilian fox, some Neapolitans, and a man with a camel haired coat.
Advert In The Art Shop Window. Will a new building job in Spain be the start of a new life?
Gaudi. A flight to Barcelona for a kebab, and a look at the Sagrada Familia.
The Day My Soul Left Me. "To be or not to be? That is the question"
How Not to Travel to The Alhambra. Hung-over, the wrong fuel, the car breaks down. Will they ever make it to Granada?
The Road To Ronda. A terrifying drive to Ronda, was it worth it?
Poking A Carob Tree. A new home and new neighbours, just in time for Christmas.
Spain Reborn.No more commuting to London. Lets celebrate!
Home From Home. A parallel world where the Spanish have taken over Weymouth.
Three Common Carp.An epic battle with a whale and marlin it is not.
Mrs. McClintock. An absurd farce in which a Glaswegian couple retire to Spain
Steak, Egg and Intensive Care. A harmless dinner leads to hospitalisation.
The Unchangeable Chameleon. Can a leopard change it's spots?
A Bricklayer's Tale. The story of a disillusioned, alcoholic bricklayer
A collection short stories and memoirs of British dark humour.
Buy Now @ Amazon
Genre - Fiction, Short Stories
Rating – PG-16
More details about the author
Connect with Gary Troia through Facebook & Twitter
Website https://www.garytroia.com
at 10:30