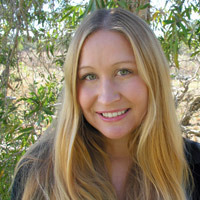 Tell us a bit about your family. I am one of those blessed people whose family is wonderfully loving and supportive. I am one of four children, so I have an older sister and two younger brothers, and I grew up on a farm on the Sunshine Coast of Queensland, Australia. We never had a lot of money, because everything went back into the farm, but there was always plenty of love and encouragement to go around and we had a menagerie: horses, dogs, cats, guinea pigs, guinea fowl, a galah, a cockatoo, cockatiel, peacocks, ducks, chickens, turkeys, turtles, even rabbits. We were madcap country kids, riding horses at breakneck speed, swimming in murky dams and creeks, zooming down steep hills of blady grass on cardboard box slides. I am surprised we all made it to adulthood unscathed, to be honest. It makes me kind of sad that I live in the city now, so my child probably won’t have a crazy childhood like that; although, I would love to move back to the country.

What are you most proud of accomplishing so far in your life? I’m pretty proud of giving birth without needing an epidural. That was probably my biggest accomplishment. Look, I’m thrilled with the success I’ve had writing. I’ve won two Whitley Commendations for my natural history writing, been picked up by publishers, and received lots of great accolades and reviews. I’m particularly proud of a book I wrote about Australian wildlife conservation. And yet, I still think that there is some truth to “the hardest thing you’ll ever learn is just to love, and be loved in return.” Truly, my biggest accomplishment in life is my family. It’s not always easy to keep it all together when you’re a solitary, stubborn, and sometimes absent, author, but my partner and my child are the dearest things in my life. I love them, they are more multi-faceted and clever and accomplished than any character or piece of writing I could create, and they’re what I am most proud of.

When and why did you begin writing? I’ve always had the gift of the gab, but I started out mostly writing poetry when I was a kid, so I’ve been a writer as long as I can remember.

What inspires you to write and why? Strangely, I often feel like I hate writing while I am doing it. I’m like Dorothy Parker—“I hate writing; I love having written.” I am one of those weird creatures who finds editing much easier than writing (it comes with my day job as a freelance editor), so grinding out the first draft can be a real chore because I obsess over details and nitpick words. Often, I even convince myself to quit. I need to just let go and write and worry about it later.

But writing is such a freeing experience in many ways. What mostly inspires me is that I have these ideas that just won’t quit, or I have emotions I need to get down on paper.

Who or what influenced your writing once you began? I suppose I have been influenced by a lot of authors over the years. I have always been a voracious reader. Those who have probably influenced me most strongly are Mary Renault, CS Lewis and Phillip Pullman.

What made you want to be a writer? I am a Scorpio and I like exploring the darker side of human nature. I love philosophy and profound thought. I like to go deep, sometimes too deep. Writing seemed like a perfect fit for my nature.

Have you developed a specific writing style? I like to think so, but I also tinker with my style depending on what I’m writing. My style for young adult is quite different to my style for adults. Also, for Cruxim, I deliberately tried to write in a gothic style, because this is not a book set in the modern era.

What is your greatest strength as a writer? I think writing poetry really helps with lyricism in everyday novel writing. I know my style will be too embellished for some readers, but I can’t help it. I have a love affair with words as much as with characters or plot.

How do you promote this book? At present, I’m still in the early stages of releasing it. Cruxim has been out less than a month, so I’m doing a lot of promotion. Blog tours, banner ads, social media networking, advertising—you name it, I’ll try it. I’m currently on a mission to get a lot more book bloggers and reviewers on board, so I have emails out there everywhere asking for review requests too. I’ll also be doing some more giveaways.

Will you write others in this same genre? Yes, this is the first in what I imagine to be a trilogy about Amedeo the Cruxim. I’m currently working on the second, tentatively titled Creche, and the third will probably be called Creed. I hope to have Creche out by Easter and Creed out before Christmas.