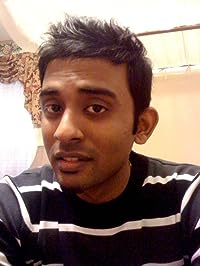 My family came to Canada during winter of 1989. I was four years old and an only child then. Three years later, we became a family of four when my mother gave birth to an awkward little boy. That boy, I was told, was my brother. We grew up in a bicultural environment, where my brother and I were made to follow Tamil cultural practices and were only allowed to speak in Tamil at home. Until this day, we still hold true to our heritage, or we try, at least. However, my brother and I began speaking English with one another sometime in the late 90s and haven’t switched back since. Yes, it annoys our mother, but I don’t think she minds as long as we continue to be as close as we are.
2.     How do you work through self-doubts and fear?
I open up my laptop and begin writing. I find that self-doubts and fear only tend to creep into one’s mind when they’re giving it the time needed to think and dwell on weaknesses that might not even be there to begin with. Why give your mind that much time to create unnecessary problems for itself? That’s why whenever I feel like bad thoughts are creeping into my mind, I push it aside and get straight to work.
3.     What scares you the most?
Public speaking makes me nervous. Losing loved ones worries me. Both are common amongst most people. As for fear. I can confidently say I have no fears. And if I do have one, I’m not aware of it, because I’ve yet to find out what that fear is.
4.     What makes you happiest?
I’m a very simple guy and it doesn’t take much to get me happy or to keep me happy. Now, if you’d like to know what would make me ‘happiest’, I’d have to go with my career as a writer taking off. Either that, or a world-class sushi buffet.
5.     Why do you write?
I write because I love telling stories, and because I don’t like repeating myself (insert chuckle here).
6.     Have you always enjoyed writing?
Perhaps up until my preteen years, I wasn’t overly fond of writing. I loved telling stories, but I hated writing them down when my teachers insisted that I do so as a journal entry or a short story.
I didn’t quite have the patience for it then.
7.     What motivates you to write?
I always finish what I start, both for my sake, as well as those who’re involved. Whenever I run low on motivation, I tell myself that somewhere out there, someone’s waiting for me to finish writing my next book and I can’t disappoint them. I then throw on my film score soundtracks and force myself to put down a few words. During the first few minutes, my brain usually curses me for pushing it to wake up. But I keep pushing at it, greasing the wheels to get my train of thought rolling. Needless to say, once I do, my brain usually thanks me for having pushed it to start working.

Haunted by memories of his massacred settlement, sixteen-year-old Weaver seeks cover in a hidden refuge among the remains of a ruined city. In the midst of building a new life, Weaver discovers that he has the amazing power to cast his dreams into reality. Convinced it’s just an anomaly, Weaver ignores it. That is until he learns of a mysterious man who shares the ability, and uses his power to bring nightmares into existence and wage war on the world. The peaceful life Weaver hoped for begins to unravel as waves of chaos begin to break loose about him. In a race against time, Weaver must learn to accept his role as a dream caster and master his new power, before his new home is destroyed and humanity is pushed to the brink of extinction.
Buy @ Amazon & Smashwords
Genre – Fantasy
Rating – PG
More details about the author
Connect with Najeev Raj Nadarajah on Facebook & Twitter
at 10:00