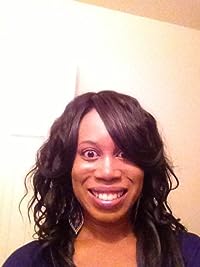 1. What makes you happiest?
I think being around my family and friends makes me the happiest. If I’m having a bad day, I can always look at my son or husband and everything just goes away. I think that’s the most important to me.
2. What’s your greatest character strength?
Positivity is a very important trait of mine, because I try to look at everything through a positive prospective. No matter the situation, I will find something that will make it more effective.
3. What’s your weakest character trait?
Being oversensitive is my weakest character trait. Sometimes, it may not be a bad thing, but I think I can overanalyze or just be super sensitive on certain situations.
4. Why do you write?
I’m an avid reader; I love to read various genres and picture the setting, characters, or situation and think about my own life. That’s why I started to write, because I want to be able to put a situation or setting into prospective and be able to focus on what the outcome will be.
5. What motivates you to write?
I have a vivid imagination, so I think that’s the inspiration I need to come up with storylines, characters, etc.  But I also think it’s my love for writing and being a reader that makes me want to create stories that are interesting and engaging.
6. What are you most proud of in your personal life?
Having a wonderful husband and son that are a joy to me are the most important to me. That and getting my master’s degree in Business Communication was a huge accomplishment for me.
7. What books did you love growing up?
I really loved The Baby-sitters’ Club and Sweet Valley High. I think I read every book pertaining to Sweet Valley High, including Sweet Valley Twins and the college version. I can also say that reading those books were inspiration for me to begin writing.

Tia Simmons has been happily dating Eric Taylor for the past 6 months, and could possibly see a future with him. He’s everything Tia wants in a man- smart, funny, and extremely sexy, but she feels something is missing in the relationship. Until she finds what she’s looking for, she’ll be with Eric as long as she can.
Charles Robinson always dated women without the concept of falling in love. He doesn’t even want to think about the word considering he was at one point in his life. When his ex arrives claiming she wants another chance with him, he starts to rethink the notion that love is not a bad thing.
While the two are living their lives, they both are centered around their best friends, Camille Anderson and Trevor Williams, who are madly in love. Seeing the two together put their own lives in prospective and wonder if their lives are where they should be; but there is one problem that have plagued them both.
Tia and Charles have known each other since high school. They were actually good friends, until one night changed their relationship forever. After that night, the two have been distanced, causing them to snip at each other any chance they got. But when a new merger unexpectedly puts Tia and Charles in the same company, the two have to come together not only for a big account, but also to settle their differences before both are out of a job.
Through a string of events, including a drunken night out, a game of strip Twister, and a wedding, the two realize that love can come when they least expect it.
(A Chance At Love is the sequel to In Love With My Best Friend, but the book is considered a standalone and can be read separately.)
Buy Now @ Amazon
Genre - Fiction- Young Adult/New Adult
Rating – R
More details about the author
Connect with Sheena Binkley through Twitter
Website http://sheenabinkley.wordpress.com/
at 13:30