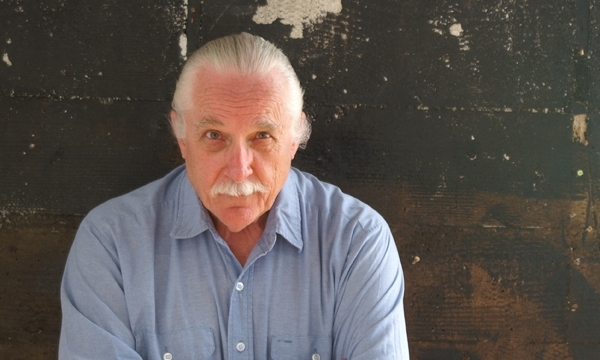 Could you tell us a little about yourself? I’m a novelist, a poet, a short story writer, a screenwriter. I’ve been a musician (piano, violin, composition), a bus driver, a social worker, a university instructor. I speak a couple of languages other than English. Early on, I traveled a lot but now I don’t like to get too far from home. Home is the room I write in. I’ve spent a lot of time in Latin America. It turns out that a lot of my writing focuses on South American themes and ideas. My latest novel, Gabriela and The Widow features a 19 year old Mexican woman who takes the hard trip to El Norte where she becomes the caregiver for a 92 year old widow.

Describe your desk/workspace. It’s a mess. It is always a mess. When I finish a novel or book I try to clean up some of the muck but I look at each paper and tell myself that I know where it is and if I file it I lose it. So I don’t file it. There are stacks of print-outs and copies of finished work. On the desk there are three computers, two printers, two backup drives (I’m obsessive about saving files so have never lost a byte…) and a separate flash drive for storing each project.  I guess you’d call it “creative chaos”.  The value of computers is that everything there is orderly. Everything is defined and easy to find so I don’t worry about the physical chaos. In this, computers are salvation. But be sure to keep a couple of external backup drives…you never know…

Do you have a favorite quote? “When not writing I get weird.”

What are you currently reading? In the last few months I’ve been engrossed in the new erotica that women writers are pumping out. There’s a real revolution going on there—women taking control of the language, taking control of their sex lives, rebelling against all the “don’t does” of prim and proper. I just read “Sex and Death in the American Novel” by Sarah Martinez. I just read a couple of Madison Montgomery’s erotic novelettes with her sexy protagonist, Virginia Templeton. On the other side, I’m reading older Don DeLillo novels such as Falling Man. There’s a lot to learn from DeLillo. It’s hard to stay current. I also continue to read in the heavy world of C.S. Peirce, Carl Jung, and Claude Levi-Strauss. They keep my mind on target—story, myth, how the brain works.

What is the best advice you’ve ever received? Thom Gunn, the poet who wrote My Sad Captains told me once, when I was imitating every poet who ever went before me, that if I lived in another man’s universe it would always be smaller than the one I could create myself. That bit of advice kick started my creative writing mind. I took it to mean that I should build on the past, stand on the shoulders of giants but not let them limit who and what I could be.

If you could have coffee with anyone (living or dead, real or fictional), who would it be and why? Hmm. I wrote a poem a while ago, “Chief Architects of the Modern World” that begins:

These are the big guys

The big guys who figured it all out

Figured out what glues one rock to the planet

Figured out why the Milky Way spins

Through time and space leaving no trail

The “Big guys” I refer to are Archimedes, Newton, and Einstein. So I guess my answer would be Archimedes. He was so close to understanding integral and differential calculus that if the Romans hadn’t killed him, Columbus probably would have flown to the New World. I’d like to talk to Archimedes, to have him tell me what he was thinking.

Hello: Thank you for running this interview. I hope readers find something of value here.