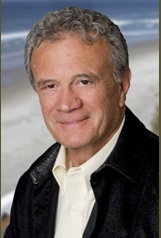 Tell us a bit about your family. My father Frank emigrated from Italy when he was 16, becoming a barber who ended up owning the hotel in which his shop was situated.  Also a commercial fisherman in San Diego, he at one time had part ownership of a tuna boat. Hard working with a heart of gold, he was the finest man I have ever known: never complained, never told a lie, he never even exaggerated. The old timers agree that he was as respected and honest as any human could ever hope to be.

My mother Josephine was also born in Italy and immigrated here when she was 7.  She helped her mother raise a big family, which included her four brothers who each served in the U, S. military in World War II. Most were eventually either wounded in action or were picked up in life rafts from torpedoed navy ships. My fighter-pilot uncle Peter, my favorite, was killed flying his P-47 out of England. After my mother Jo and dad married, she was trained as an electronics tech and worked in the aircraft plants during the war. An expert at reading electronic blueprints, she ended up putting together astronaut Alan Shepard’s instrument panel for his historic first flight into space.  Jo is now 98, very sharp and proud of her 14 great grandchildren whom she delights in showing off. She is no doubt the finest women I have ever known.

We have a warm, close family of siblings and cousins, many of whom have become quite accomplished, especially for being first generation Americans.  They include my brother John Asaro, a famous artist, cousin Frank Asaro, Ph.D., a nuclear chemist at Berkley; Catherin Asaro, Ph. D., a physicist and well-known author, Marialynn Sardo, M.D. a plastic surgeon, Sal Ferrantelli Ph.D. A noted coral director in the Monterey, California, and a host of others, all originally from the Little Italy section of San Diego, and stemming from the idyllic port of Mazarra Del Vallo, Sicily, near the birthplace of Archimedes..

What is your favorite quality about yourself? If I get the time, I love to muse, cogitate and create stuff.

What is your least favorite quality about yourself? I put off things for which I have developed an aversion.

What is your favorite quote, by whom, and why? I don’t remember who said: Got helps those who help themselves, but if we don’t rediscover that admonition humanity will drown in its self-created ocean of nanny-ism.

What are you most proud of accomplishing so far in your life? My four children: Dean, Stephanie, Valarie, and Audrey who is now with angles.

What is your favorite color? Any color you’d like to taste, see, touch, or smell.

What is your favorite food? Depends on my mood, but I naturally like Italian.

What’s your favorite place in the entire world? A deserted island in the south pacific. My girlfriend and I were there.

How has your upbringing influenced your writing? Traditions imported from the Old Country influenced how I grew up.