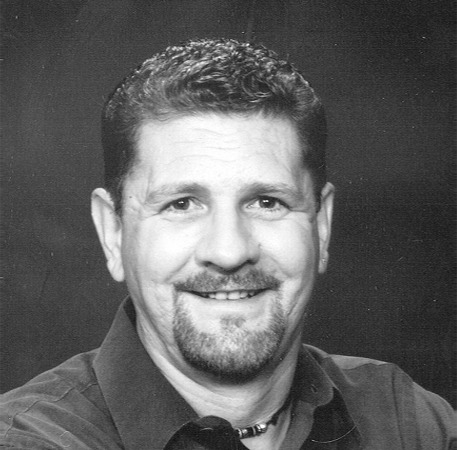 Tell us a bit about your family. I was raised by a single mother in St. Louis, Missouri. I never knew my father but I’ve heard he was a somewhat famous (now retired) right-wing radio talk show host. My uncle and (now, dearly departed) grandfather were my father figures while I was growing up in St. Louis. I had an adopted sister but she passed away when she was sixteen. I’m divorced so, at the moment, it’s only my lab/terrier mixed-breed dog named Izzy and I. We live in Jacksonville, Florida.

What is your favorite quality about yourself? I have a dry sense of humor marked by a tangentially perverse wit.

What is your least favorite quality about yourself? I hate being alone and I hate thriving on being alone by filling the time with creativity. It’s a double-edged sword that both cuts and heals.

What is your favorite quote, by whom, and why? “Don’t dream it, be it” from the song “Fanfare/Don’t Dream It, Be It” in The Rocky Horror [Picture] Show written by Richard O’Brien. I can’t imagine a better description for a philosophy about how to best live your life in only five words.

What are you most proud of accomplishing so far in your life? Completing my PhD in Architecture at University College London even though it took 20 years to accomplish with an 8-year sabbatical during that period, so really only 12 years of dedicated work on writing the thesis.

In our distant future, a tale of things past… Humanity is isolated in its corner of the universe. The Sovereignty is an oligarchy ruling the planets and outposts in our solar system. It has endured for 1,000 years. But the foundations of its society are crumbling, eaten away by corruption, excess, and personal ambition. A struggle for dominion of the Sovereignty leads to the ascension of supreme power for one whose eventual fall will plunge the Sovereignty into chaos and civil war.

Narrated from the perspective of a historian looking back on events that occurred many years ago, Mars Rising blends together the story and history of a distant future in a gripping drama that chronicles the epic people and events, plots and betrayals, instigating the fall of the Sovereignty and the rise of an Empire. Mars Rising is a fast-paced, character-driven political thriller in the science fiction setting of our future, now with illustrations by Jonathan Atkins.

Email ThisBlogThis!Share to TwitterShare to FacebookShare to Pinterest
Labels: M