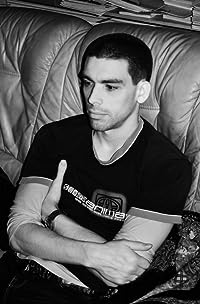 How do you work through self-doubts and fear?
It’s quite a cliché, but I have to remember that I’m writing for myself. If I start worrying about whether it’s good, whether other people will like it, then it becomes a self-fulfilling prophecy. The minute you start censoring yourself out of doubt and fear, you end up with a nocebo that makes your writing suffer. As long as you just write what you want to write, and let it out when it needs to be written, then at least some of it is guaranteed to have an audience.
What scares you the most?
Dying with regrets. More immediately, I’m scared that the ridiculous cost of living is so high I’ll end up working a dull and unfulfilling job for the rest of my days, and never have time for anything creative ever again. Also being stuck in a really narrow tunnel deep underground where no-one can hear me.
What makes you happiest?
The outdoors – biking and hiking in forests and mountains miles from civilisation and noise. That and being creative. On top of writing I love designing, making music, even building mountain bikes in the garage. I’d love to learn how to draw too, it’s only time holding me back while in full-time work. Then there’s the more left-brained activities as well – I couldn’t live without reading and learning about maths, science, and psychology. I have to say drinking Guinness also makes me very happy.
Why do you write?
Like most writers, it’s an outlet for me – I’m generally quite reserved around people, and even then I still have a reputation for being weird. If I stopped holding back and let out everything that was flying around inside me, I’d be carted off. I just feel the numbing boredom of day-to-day life to be so stifling that all the imagination, exploration and yearning inside would build to bursting point, and I’d go mad right there and then. Writing everything out keeps the door to that world open, it dissolves blocks and I find that life flows better.
Have you always enjoyed writing?
Yes, I’ve always had a vivid imagination. When I first started school I was so shy and quiet that my teachers thought I was a special needs kid, but I would write these little stories about being made of Lego or flying an aeroplane into the sun, and they loved them. Apparently they were both relieved and impressed to see what was really going on inside.
What writing are you most proud of?
I’ve actually written a couple of short stories from a female perspective. Both times it just felt like this part of me that needed a voice, and I had to let her speak. When I sat down to type, it all spilled out and the stories wrote themselves, I was just their vessel. I was so flattered and relieved when the girls who read them liked what I’d lent to the narrative and the characters, and it didn’t sound horribly forced. I’m proud of them because they opened up hidden sides of me that would otherwise have stayed hidden.
What books did you love growing up?
During my early teens I was a huge fan of sci-fi – I’d read the whole Dune saga by age 15 and absolutely loved it. It was a universe that stayed with me for years after. Some of the best sci-fi came out of the 60s and 70s, and I’d go to my local library and read and re-read books by Simak, Van Vogt, Asimov, Philip K. Dick and so on. I also devoured anything by Stanislaw Lem, whose crazed imagination really fired my own. Although I wasn’t much into fantasy, I loved Tokien – I think he can reach anyone. The Lord of the Rings was an obvious favourite, but The Silmarillion was something else. It was like a bible to me.