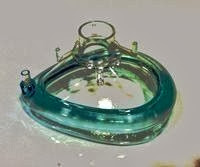 IN the freshman year of my anesthesia residency, I was given a lesson in breathing by a patient whom I’ll call Otto. Anesthesia residencies come replete with breathing lessons, but Otto was also teaching humility that day, a subject absent from the formal anesthesia curriculum.
A doctor gets humility not from curricula but from his patients. I acquired a truckload of humility the day I met Otto, and the truck has only gotten larger since.
Otto was undergoing a cystoscopy, a look inside the bladder performed by passing a thin viewing scope through the urethra. There is no incision in such a procedure.
Generally, you don’t need anything fancy to support a patient’s breathing while giving anesthesia during a cystoscopy. As the patient passes from wakefulness into unconsciousness you can let him continue to breathe for himself.
In Otto’s case, I strapped a rubber anesthesia mask over his mouth and nose to make an airtight seal against his skin, and delivered through the mask an appropriate combination of oxygen and anesthetic gas. In principle, what I did was essentially what the Boston dentist, William Thomas Green Morton, had done during the first public demonstration of ether anesthesia in 1846.
The modern anesthesia face mask is a hollow cone of rubber or plastic. It’s like the oxygen mask that drops down from above a passenger’s head on an airplane, though it’s more substantially built. The base is malleable and cushioned by a ring of air, a sort of inner tube. The mask is shaped to fit around the nose and mouth; with a bit of pressure, it seals against the skin. The top of the mask connects to a source of anesthetic vapor and oxygen.
Readers of a certain age may remember the TV series, Marcus Welby, M.D., which began each week with Dr. Welby lowering a black anesthesia mask down over the camera lens. In those days, apparently, the family doctor did everything.
The anesthesia machine—the “cascade of glass columns, porcelain knobs and metal conduits” I described previously—is the gas delivery system. The machine connects to an oxygen tank and directs the flow of oxygen from the tank through a vaporizer where the oxygen mixes with anesthesia gas. The mixture passes out of the machine through plastic tubing (“anesthesia hose”) that connects to the face mask.
The patient breathes the mixture.
Gas leaving the anesthesia machine actually flows through the anesthesia tubing in a circle—in fact it’s called the circle system. One limb of the circle travels from the machine to the anesthesia mask, where the patient inhales it. The other limb, carrying exhaled gas, travels from the mask back to the machine, where excess carbon dioxide from the patient is filtered out. The filtered gas is mixed with fresh gas and travels back to the patient.
The same gases, minus the carbon dioxide, keep going round and round. The system is airtight, except for a pop-off valve that relieves excess pressure.
Otto was a large man with a thickly muscled neck, but by extending his head I could keep his airway clear, allowing him to continue breathing while the urologist worked. Instead of using an anesthesia mask to deliver my mix of gases, I could have assured Otto’s airway by using an endotracheal tube. This is a long breathing tube (about a centimeter in diameter) inserted through the mouth all the way into the trachea.
But getting an endotracheal tube in isn’t always easy, and it’s usually not necessary during a cystoscopy. Most often an anesthesia mask will do.
One side effect of anesthesia is the loss of normal muscle tone. This happened to Otto. A few minutes into the case, his flaccid tongue fell back in his throat. His diaphragm continued to contract, but air couldn’t get through to the lungs—his airway was obstructed. Otto was, of course, completely unconscious at this point.
Everyone loses some muscle tone during sleep—this is the cause of snoring, and of the more serious condition of sleep apnea. But the loss of tone is even greater under anesthesia, and the anesthetized patient cannot rouse herself to find a better breathing position.
I managed the problem by putting a short plastic tube called an airway into Otto’s mouth. The airway depressed the tongue and cleared a passage for air. It wasn’t as good as an endotracheal tube, which would have extended all the way into Otto’s trachea, but it seemed to do the trick.

Email ThisBlogThis!Share to TwitterShare to FacebookShare to Pinterest
Labels: B, W