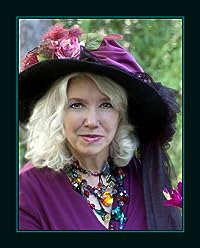 Tell us about your mystery? What’s it about?

Floats the Dark Shadow is set in Belle Époque Paris in 1897—about 10 years after the Eiffel Tower went up.  It was a golden age—but I show more of its dark and decadent side.  My American heroine, Theodora Faraday, is something of an innocent abroad.  She’s living her dream, discovering herself as an artist in what was then the most exciting city in the world.  She’s fallen in love with her cousin, one of a group of poets called the Revenants.  The dream becomes a nightmare when children she knows vanish and are found murdered.  Theo believes a sleazy Satanist committed the crimes.  My detective, Michel Devaux, thinks one of the Revenants is the murderer.  Theo and Michel first work at odds and then finally together to capture the villain, who believes he’s the reincarnation of Gilles de Rais, once Joan of Arc’s lieutenant and later the most prolific and evil serial killer in French history.

Why did you choose this story?

Strangely enough, I tried writing a different Belle Époque novel for about a year. I had a heroine I liked and kept telling her she was an artist, because I really, really wanted an artist heroine. But this character kept telling me she was a journalist. I had a plot, but it refused to come to life. The characters wandered around aimlessly.  Writing about that era was what I wanted to do, but it wasn’t working. Thrashing about, I asked myself what else I could do, and I remembered an earlier fascination with Gilles de Rais because of the extremes of his life – the inspiration that Jeanne d’Arc could at least be presumed to have been, followed by the descent into bestial cruelty that was also dressed up in cloth of gold. But I really didn’t want to write about that period. Then my brain went Copy Cat!  Everything fell into place like dominoes. The former hero and heroine became secondary characters, then vanished. I needed a cop and still wanted my artist heroine. I’d started a romance that was essentially La Femme Nikita in Elizabethan England. I took those characters but had to find new lives for them because they weren’t in thrall to Walsingham’s spy system. I wanted a conflicted hero who was shut down on some level and saw that his history was woven with the Commune. While she’s lived rough and tumble for a while, Theo has a certain inherent innocence and optimism that made a great counterpoint to the fin-de-siècle European sensibilities of the other characters. And as for the villain – Gilles de Rais, though he could be totally crass and brutal, could also be an artist of evil, staging his murders, staging his whole life, which made him the perfect inspiration for my killer.

What are your goals as a writer?

Now my goals are to write a short series with these characters from Floats the Dark Shadow—maybe five books that would complete the character arcs that are set up.  After that, I might move sideways with the minor characters taking over a book—Lilias the courtesan would be an excellent detective.  Or I might journey with the characters into the future.  Paris in the 20s would be fascinating.

How did you come up with the title for your mystery?

I looked through French poetry of the era, especially Baudelaire and Rimbaud, hoping to find something evocative, and found Baudelaire’s A Madrigal of Sorrow.  The stanza I used reads: When your heart is in horror lost/And over your present like a Ghost/Floats the dark shadow of the past.  It was perfect for my villain who believes he is possessed by the spirit of the medieval serial killer Gilles de Rais.

Are you working on a new book?

I’m working on the sequel to Floats the Dark Shadow.  It keeps getting ever longer and ever more complex, with more narrators demanding to be heard.  It’s set against the furor of the Dreyfus Affair – an innocent officer was accused of treason and convicted because he was Jewish.  But that’s just a piece of the story.  The characters are confronted with all kinds of prejudice.  My heroine has the on-going problem of having her work taken seriously because she’s a woman.  Two of the male characters begin an affair, so you see the anti-gay stance of the French.  But along with those oppressive attitudes is there relative acceptance of blacks—the hero has a black American friend from the French Foreign Legion who plays a major role.

How did you decide on the sequel?

I sort of decided on me.   When I was working on Floats the Dark Shadow, I suddenly realized that the Dreyfus Affair must be going on.  I didn’t really want to deal with that in Shadow, the tone was too different.  I researched it, and found I’d magically picked the few months on either side of Dreyfus’ arrest and conviction, and then Zola’s for libel, when Paris was not in a frenzy over Dreyfus’ supposed treason.  A blessing from the gods.  I made mention of it, briefly, and figured that the sequel would pretty much have to deal with it in one way or another.  It was so huge a moment in French history.

Is writing about political upheaval difficult for you?

I find the Dreyfus Affair fascinating to read about, but not so much so to write about.  As I’ve progressed, I’ve found ways to bring up the other elements of the book—the gay romance, the search for the imprisoned sister.  Since I have more passion for those parts of the plot, it’s made the sequel stronger, but the trial, the riots will still play a major role.