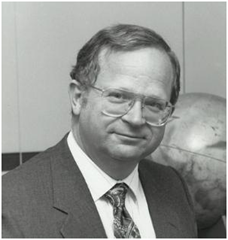 Tell us about yourself. I was the Project Manager of NASA’s highly successful Mars Global Surveyor Mission – a spacecraft that orbited Mars for nine years, returning two hundred thousand images of the planet and relaying pictures from the Mars Rovers. I have published six historical mystery thrillers of the Darmon Mystery series about a couple from Kent that solves international crimes during the 1830’s. These novels include: Message of the Pendant, The Forth Conspiracy, Patriote Peril, Fair Wind to Bahia, Desperate Crossing and Without Redemption.

Tell us about your background. I grew up in North Hollywood reading science fiction. As an amateur astronomer, I built telescopes and spent many a cold night in Fraser Park taking pictures of nebulae, galaxies and comets. During summers while attending UCLA, I worked at NASA’s Manned Spacecraft Center with the original seven astronauts, at Lowell Observatory and JPL. Upon graduation, I started employment at Eastman Kodak (Lunar Orbiter) before returning to the Jet Propulsion Laboratory in Pasadena. There, I spent 38 years participating in the defining moments of Mars exploration by Mariner, Viking and Surveyor spacecraft. Ultimately, I managed the Mars Global Surveyor Mission through most of its ten-year operational life. I have published numerous science articles on Mars photometry and also taught astronomy in Glendale College’s extended day program for nearly forty years.

Why write historical fiction? With a career in space exploration, you might wonder why I chose to write books of historical fiction rather than science fiction. Historical and science fiction share a common thread: confronting the unknown. It is a circumstance that both frightens and fascinates. Our vision of exploration comes from  experiences of our ancestors who tamed wildernesses and created colonial outposts. Imagine being plopped onto a foreign shore during the early 1800′s. The physical environment is tough and tasks we take for granted today were overwhelming obstacles. Beyond these trials came threats from indigenous cultures, disease such as cholera, lawless frontiersmen and regimes on the verge of collapse.

Why do you think mystery novels are important? When I managed Mars Missions for NASA, I was often asked, “do you believe in the face on Mars?” A fellow by the name of Hoglan made lots of money speculating on the possibility that the face was constructed by aliens. Such imaginings are not all crazy and have spurred the investigation of canals on the planet for hundreds of years. People strive to understand their environment and nothing excites the mind like solving a good mystery. Mankind seeks enlightenment, answers to the unknown, it is in his nature. No matter if you’re a scientist trying to understand the universe, a police detective solving a life or death case or just someone looking for missing car keys, we learn from the process and recover from our mistakes. So my answer to “do I believe there’s face on Mars” is, no, better camera resolution  shows it to be a mesa covered with rocks, but then again, what about those microbe fossils in the Allen Hill meteorite and traces of methane in the atmosphere?

What authors inspired you? Since the age of eleven, an avid interest in astronomy led me to read lots of science fiction. Favorite authors included Robert Heinlein, Poul Anderson and Philip K. Dick. Later in life, historical literature captured my attention, especially when brought to life in classical productions aired by the BBC.

A catalyst for my stories can be found in the novels by Jane Austen. Her vivid portrayals make it easy to imagine similar characters involved in more adventuresome activities such as murder mysteries of the period. The research required to create accurate settings is not unlike the practice in science, and typically, a year’s preparation was necessary to put these mystery/thrillers into authentic historical periods for each country.

How did you make the Transition from writing science papers to writing prose? Historical mystery thrillers require a combination of styles. A big question for me was was how to transition from writing objective science papers to writing prose in the genre of literature, how to build suspense, make characters come alive and develop a story. Developing suitable writing styles requires considerable reading, advice in novel writing and practice, practice, practice. In my case, this included fan-fiction writing on the internet. Early papers can still be found in the archives of the Republic of Pemberly homepage.

Why this time period? The era was both fascinating and turbulent. Nations struggled with self-government, having emerged from colonialism or repressive monarchies. Word of the French and American revolutions had spread worldwide. Tensions flared between traditional royalists and young radicals who promoted new ideas of democracy to free themselves from repressive social classes. The idea of personal freedom threatened the economic engine of most countries: slavery. Already condemned by the church, the practice became the target of rebellion among slaves, sepoys, serfs and Quebecois. As a result, conspiracies abounded and murders were common.

Into the mix, are thrust the Darmons, who solve mysteries occurring worldwide between 1820-1845. William and Elizabeth, her sister Emily and brother-in-law Charles and youngest sister, Victoria. They’re world traveling aristocrats whose money provides access, but encounters with other cultures make them truly “fish out of water.” The six novels are set in  England, America, Egypt, Canada, Brazil, Russia and India.

William Darmon and his wife Elizabeth, owners of Mayfair Hall, fall victim to rival Forth family who introduce a bill into Parliament called the Writ of Confiscation. It will repossess the Darmon’s ancestral home unless they can find their missing deed. A late family friend hid the document on a trip to Egypt decades earlier, leaving a clue to its location only visible in the night sky of 1825.

As the Darmons begin to unravel the mystery, a Forth body turns up on their doorstep. William and brother-in-law, Charles set off for the Mediterranean only to be waylaid by Greek independence fighters on the eve of a massive Egyptian invasion. William’s escape finds him stranded in the Sahara far behind Forth members attempting to destroy his property title. Historically accurate events provide non-stop suspense.