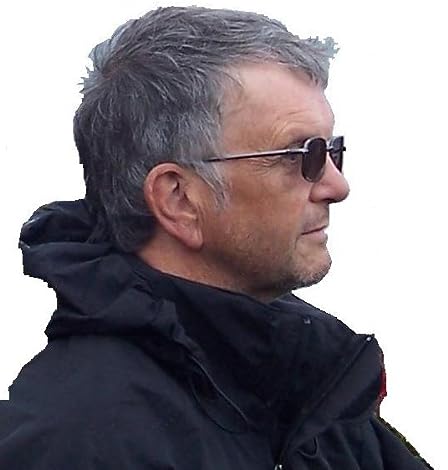 Tell us a bit about your family. My wife is a rocket scientist, handy to have around for this science fiction writer as she is faster than Google when asked about Newton’s Laws and Charles’ boil – I might have got that a bit wrong because currently she is at a Physics Conference. My children are highly critical but have their own tribes now in different nesting grounds. More intelligent than me and they know when I’m joking.

What is your favorite quality about yourself? I believe the best thing about me is I’ve adopted my grandma’s adage: Allow everyone three faults. Hence I’m forgiving and don’t bear grudges.

What is your least favorite quality about yourself? I’ve been told my most annoying trait is that I allow everyone three faults.

Can you share a little of your current work with us? This work is the first volume of the ARIA trilogy.
As I puffed, riding my bicycle up a steep Welsh hill 5 years ago I had an original idea. What if amnesia was infectious? Then what if no one was immune. I researched like crazy for 4 months to discover a) there was no known medical event of infectious amnesia, and b) that the concept – especially with retrograde amnesia (lose say a year’s worth per day backwards) – hadn’t been used in published stories, nor on TV or film. It took a year to create the first 100k draft. I showed and discussed it with SF luminaries such as Jon C Grimwood, Charles Stross and US writer, Brad Linaweaver, who all endorsed it. Also to pal, Allan Guthrie, who is an agent, editor and author of hard-nosed crime. He wanted me to rewrite and tighten like crazy. So I joined the BSFA Orbiters and it went through SF members that way – very useful. An agent took it on. Scottish publisher, LL-Publications snapped it up last autumn and the first volume of ARIA had its release on August 1st 2012 – yeay.

How did you come up with the title? The original premise in the ARIA trilogy is that of infectious amnesia. It doesn’t exist in reality – I know because I interviewed a professor of neurology. There are infectious diseases such as meningitis from which some patients can suffer memory loss but their amnesia is often temporary and not retrograde (lose memory back from now). I and my agent and friends researched databases of science fiction plots and found no story using the idea of infectious amnesia. There is a Star Trek episode where the crew are made to forget what happened but that is quite different. The amnesia virus is planted as a kind of Trojan horse by aliens. Hence we have an Alien Retrograde Infectious Amnesia (ARIA). If you were anticipating a musical story I apologise. Just hum arias from Wagner or Puccini while you read ARIA. Left Luggage because the virus is planted in a suitcase that is deliberately left in the struts of the International Space Station.

Who designed the cover? Award-winning Andy Bigwood is the artist for the ARIA trilogy. I send him great ideas then he sends back completely different and better ones! We meet at conventions such as FantasyCon and BristolCon so we know each other’s work and ideas.

Who is your publisher? LL-Publications wisely took me on as one of their authors. Established in 2008, LL-Publications is run by the husband and wife team of Jim and Zetta Brown. They are proud to be a small, independent press. Their aim is quality over quantity and their motto is “taking the reader down a different path” because the titles they produce are not recycled plots with reused characters in uninspired settings but compelling tales that readers will remember.

One of the reasons they accepted ARIA: Left Luggage is because the concept of infectious amnesia is unique. No one has used that idea and it doesn’t exist in medical reality either – thank goodness! Just imagine the ramifications. Website http://www.ll-publications.com

How do you promote this book? I created a facebook page for it at http://www.facebook.com/AriaTrilogy and refer to it probably too much on readers and writers forums and twitter. I arranged signings at conventions and libraries. I and the publisher sent media releases to newspapers and magazines along with copies of the book for reviewers. For my blog and discussion groups I created a list of unusual facts about the book:
I obtained quotes from the famous and the good SF writers eg. Jon Courtenay Grimwood  – “Geoff

“Geoff Nelder’s ARIA has the right stuff. He makes us ask the most important question in life and science fiction–the one about the true limits of personal responsibility.” – Brad Linaweaver.

“ARIA has an intriguing premise, and is written in a very accessible style.” – Mike Resnick.

Is there a message in your novel that you want readers to grasp? One message is that when and if aliens contact us, be prepared for the unexpected. They are unlikely to appear, speak English, and wait for the trigger-happy among us to fire first.

Another message is to consider what is of vital importance for your survival, and for happiness. If you forgot all your friends and family, what would that feel like, and could you devise coping strategies? I hope this book helps readers to re-evaluate their lives as well as be a great adventure story.

How much of the book is realistic? I spoke to a professor of neurology about whether there was such a medical condition as infectious amnesia. He decided there wasn’t, but a woman colleague couldn’t say that it would be impossible. They both looked aghast that perhaps we’ve all been lucky that it hasn’t already happened! After all the world has experienced pandemics such as Bird Flu and some infections are very difficult to combat. It is not outrageous to envisage a variant of a SARS or ebola virus for which no one is immune and one of its effects is to wipe memory. I could have written ARIA along those lines – ie a pandemic virus that wipes out most people but there have been many books and films of apocalyptic viruses (even if not amnesia) caused by pollution or chemical warfare. I have to be different.

Do you have any advice for writers? Don’t self-publish your novel before asking for honest comments from experienced writers, editors and readers. The best plan is to read as many books on writing as you can including Stephen King’s On Writing, Sol Stein’s many tomes on writing and a slim ebook called How to Win Short Story Competitions. It has lots of advice relevant to novels too and delves via anecdotes and examples into Show not Tell, active voice and 3d characterization. It’s written by two experienced story competition judges, Dave Haslett and Geoff Nelder – yes, that’s me!

Do you have any specific last thoughts that you want to say to your readers? You will enjoy ARIA even if you are not a science fiction reader per se. It is a medical mystery, an adventure, an exploration of life’s difficulties and how to cope with disaster. There are no aliens and weird rocket ships in volume one. They come later but be prepared for the lack of stereotype.

Have you considered making a video trailer to help lure readers? Yes, thanks for asking! Creating a short video trailer that is a hook and artistic is part of the creative process for me. I create a screenplay for the video along with ideas for text and music and engage Kim at Blazing Trailers to put it all together. Here is the YouTube for ARIAhttp://youtu.be/oh0AAXIe8VU

Email ThisBlogThis!Share to TwitterShare to FacebookShare to Pinterest
Labels: A, G

Come across your interview with Geoff Nelder, enjoyed the read as much as I’ve enjoyed his other books; Escaping Reality and Exit pursued by a bee. Will now order Aria and get stuck into it.

Keep up the good work Geoff,

Thanks John. You are an amazing writer yourself so the praise is appreciated.

Great! You are Amazing, Geoff