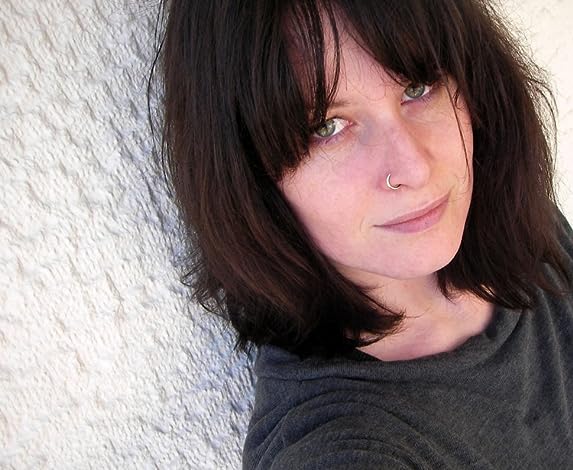 You founded and are co-editor of Vine Leaves Literary Journal. What inspired you to create this new journal? What types of literature do you publish and how do people submit to you? In late 2011, Dawn Ius and I founded Vine Leaves Literary Journal to offer the vignette, a forgotten literary form, the exposure and credit it deserves. The vignette is a snapshot in words, and differs from flash fiction or a short story in that its aim doesn’t lie within the traditional realms of structure or plot, instead it focuses on one element, mood, character, setting or object. The journal, published quarterly online, is a lush synergy of atmospheric prose, poetry, photography and illustrations, put together with an eye for aesthetics as well as literary merit. The annual print anthology showcases the very best pieces that appeared in the journal.
Submission guidelines are on the website.

You organized a big writing conference in Greece last summer where Chuck Sambuchino from Writers Digest was the instructor. What made you decide to organize this event? I have long dreamed of running a writer’s retreat on Ithaca. I’ve spent a lot of time on this little Greek island since the age of two, because my step father and his family are from there (my parents also live there now). With the risk of sounding clichéd, (ha!) this place really is a little piece of heaven. It remains unspoiled by the modern world. Even in the height of summer you can find a secluded beach or a rustic corner to contemplate your thoughts. On Ithaca you’ll discover the island’s rich culture and the reason why it holds such a special place in the hearts of those who have visited its shores.

The Homeric Writers’ Retreat & Workshop invites participants to their very own private odyssey on the island of Ithaca—a retreat about riveting one’s writing through an immersive and intimate Homeric journey.

Our instructors in 2014 are, Katharine Sands, a literary agent with the Sarah Jane Freymann Literary Agency, and Beatriz Badikian-Gartler, a popular performer in the Chicago area who often lectures on women’s issues, art, and literature. In 2000 Badikian was selected as one of the One-Hundred Women Who Make a Difference in Chicago by Today’s Woman magazine.

Have you ever had writer’s block? If so, what do you do about it? Absolutely. I usually take it as a sign that I’m burned out and give myself a break. It works.

What are your goals as a writer? To have my books linger in the minds of readers long after they’ve turned the last page. With regards to my non-fiction, to help aspiring writers realize that writing doesn’t have to be as overwhelming as it seems. Learn the craft in bite-sized pieces, and eventually everything will come together.

Can we expect any more books from you in the future? Absolutely. I will never stop writing, so I can’t see why I would stop releasing books.

What are some of the best tools available today for writers, especially those just starting out? Definitely blogging, and all sorts of social media. Some excellent community websites to look into are:
http://www.wow-womenonwriting.com/
http://writerunboxed.com/
http://www.worldliterarycafe.com/

Do you have any specific last thoughts that you want to say to your readers? I’m often asked how my writing can be so brutally honest and not be real. As I said to a reviewer recently, there is  “… a difference between ‘honest’ and ‘factual.’” For example, in Twisted Velvet Chains, a poetry collection of mine, I’ve really amped up the ‘tragic’ quality of the poems and although the content stems from ‘real’ feelings I had at some point or another, they do not necessarily stem from the events in the poems. Notice I say ‘stem from’ real feelings. As writers we have the freedom to embellish.

I also know what it feels like to hate everyone in the entire world as a teen—teens tend to feel that way, and teens tend to exaggerate those feelings, too. I know what it feels like to love, to hate, to envy, to regret, to feel so passionate about something that you don’t care what is going on around you. Put all these ‘experiences’ together, and wham, you’ve got something that is ‘honest,’ but not necessarily ‘factual.’

What do you do to unwind and relax? You’ll always catch me reading when I go to bed. But I’m also a sucker for a great TV series. My favorites are Homeland, Grey’s Anatomy, Dexter and Fringe.

When you wish to end your career, stop writing, and look back on your life, what thoughts would you like to have? That I don’t regret one minute of it.

Do you consider yourself above all a singer/songwriter or a writer? A writer for sure. I was born into music, so it came naturally, but writing is something I gradually learned I wanted for myself and had a strong passion to pursue.

What gives you the hardest time? Lyrics for a song or a poem? Neither. I love to write both, and when I love something, the word “hard” does not have a place in my vocabulary.

How would you describe your discography until today? Grunge-pop, atmospheric? To be honest I have no idea. My style varies quite a lot from album to album. Bar the latest album, Melody Hill, which is the soundtrack to my novel, String Bridge, I think my music is in major need of reproduction. If only I had the money, then I could make my music sound how I hear it in my head, rather than what my wallet determines.

What are the messages that you think your readers will take away after reading your books? Take control. You are the only one who can make your life what you want it to be. Embrace the good and the bad. If you look at the bigger picture, there is no such thing as a bad experience. Believe in love and hope; if there’s a will, there’s a way.

Publishing has changed so much over the past few years, and I think it’s time people learn to embrace it, just like they had to embrace the digital revolution of the music industry. Independent artists are everywhere now. What people have to understand is, authors don’t self publish because they’re lazy to go through the slog of submitting queries to agents, or editing their manuscripts properly, or simply out of impatience to see their work in print. Self-published authors are, in fact, some of the most motivated and tough-skinned authors I’ve ever known.

A lot of them, including me, have huge stories behind the reason they self publish. Stories that most people will never know about, because when someone releases a book, it’s not like you can say on the blurb, “This book is self-published, but I actually once had an agent and a book deal with a Big 6 publisher, but decided to go the indie route because I felt it was better for me, both professionally and emotionally.”

“This book is self-published because I spent years and years querying it, was told that the writing was great, but no agent believed they could sell it. So … here’s my book. I don’t need to sell a million copies, a few hundred is enough for me. Plus it’s been through so many edits after all the agent feedback, I doubt you’ll be able to find one thing wrong with it.”

“This book is self-published, but actually it was once traditionally published by a small press. Unfortunately they liquidated and I had to get it back on the market as quickly as possible before all my marketing efforts went to waste.”

So … I urge everyone who is skeptical about self-published works, to think about the story behind it, and the effort it’s taken to get it out there, and the heartache the writer has been through to finally come to the decision to do it on their own. Self-publishing is no longer for the impatient … it’s for authors who have done everything they can before finally deciding to take their fate into their own hands.

Email ThisBlogThis!Share to TwitterShare to FacebookShare to Pinterest
Labels: A, J