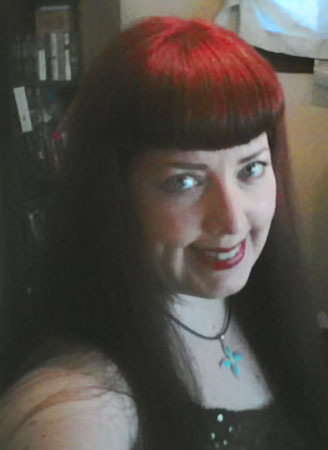 If you could travel in a Time Machine would you go back to the past or into the future? That’s a tough one, because I’m equally fascinated by the past AND the future – my major is in medieval history, but I love to read and write science fiction. I’ll bite the bullet and say the future, just because I’m dying to know where we’re headed.
If you could have any superpower what would you choose? The ability to do things 100 times faster than anybody else. That way I could write as many books as I want and still be able to keep up with my work and social obligations.
What is your favorite flavor of ice cream? Pretty much anything with chocolate in it.
Night owl, or early bird? Early bird, unfortunately. I wish I could be a night owl, but I seem to have inherited my father’s early bird gene.
Skittles or M&Ms? M&Ms. I love chocolate.
Any other books in the works? Goals for future projects? I have a ton of books in the works. My next Tales of the Latter Kingdoms book is about halfway done, as is the next novel in my Gaian Consortium series. The second book in my Sedona Trilogy is in edits right now and will be out at the end of January. And that just covers the first half of 2013.

What inspired you to want to become a writer? I can’t really remember a time when I wasn’t reading. In my head I was always making up stories about the characters from the books I was reading, so it just seemed a natural extension of that to move into writing my own books.
If you could jump in to a book, and live in that world.. which would it be? Middle Earth. Tolkien’s world is so rich, it would be amazing to be able to experience it first-hand.
What was your favorite book when you were a child/teen? The Lord of the Rings trilogy. I think I read it all the way through about 15 times during junior high and high school.
What’s one piece of advice you would give aspiring authors? Write. Just write. I don’t know if it’s really true that you have to write a million words of crap to get to a point where you begin to be proficient, but it is true that the only way to get better is to practice. I think it’s also valuable to be in a critique group or find other writers to swap work with, especially in the earlier stages. Other people’s feedback can be invaluable, especially if two or three people are all telling you the same thing.