If you are a parent or teacher concerned about your children and the effects of bullying, you will want to read Thomas and the Lily Pond.

Bullying has an enormous negative impact on our society. It can strike unexpectedly and it leaves millions of innocent victims completely bewildered and often ostracized through no fault of their own. The earlier we can alert our children to this unfortunate reality the better. It requires reaching out to them as soon as they can comprehend the meaning of the word bullying.

Thomas and the Lily Pond is a book written for children from ages four to six years old. It specifically describes this issue, the signs leading up to it and the full impact bullying can have on the recipient. It is a fully illustrated story set in a forest, revolving around a very contented group of animals working and interacting together very amiably, until their world is quite literally turned upside down.

The cause of this upset is due to the arrival of an enormous frog who is decidedly devoid of any social mores. His primary target is the poor, hapless turtle named Thomas, a hard worker and also a very popular and valued member of the community, until he has the great misfortune of being confronted by this large, green, uninvited interloper.

Trust, betrayal, loyalty and manipulation are demonstrated and brought into question in Thomas and the Lily Pond. Friends of the docile turtle now turn on him. Included in this melange is a feisty skunk named Spike, who values his role as fierce protector of the forest, a vain blue jay, a chatterbox chickadee, a bounding rabbit with large, droopy ears and a very prickly porcupine, named Princeton. A deceitful plan is hatched and most of the trusting group forget about their true and loyal friend as they are all consumed by greed.

The whole scene is observed by Winston, the wise owl who sits and surveys all from his perch high up in the old oak tree. After a raging storm erupts and a potential disaster in very wild and rough water, the group is rescued by the least strident and innocent one of all.


There are many pearls of wisdom and many pitfalls to enlighten your child within this creatively illustrated and easy to understand story. By the conclusion, many questions will be up for discussion as to why some people do not have our best interests in mind, but rather, their motives are often driven by a self serving agenda. Children will recognize how easy it can be to lose sight of their own values and fall prey to others through great temptation and the influence and pressure of others.

In Thomas and the Lily Pond your child will see many examples of unacceptable behaviour that unfortunately and increasingly pervade our society. Through this recognition and understanding your child may be able to make a difference in the world.

This is a book parents can easily read to their child in its entirety, or enjoy and savour chapter by chapter as a bedtime story over the course of several evenings.

Martin the Christmas Mouse is a heartwarming story for children, ages 4-8 years old. The book is filled with large beautiful illustrations, depicting the comings and goings of a very helpful little mouse.

Martin lives in a tiny house with his parents and younger sister, Maria. It is Christmas time and they’ve been decorating the inside of their tiny abode. Their little place is set inside a larger home, owned by Mr. Kingsley. This kind and gentle man has no idea that he shares his residence with the mice! Martin runs freely, throughout both places, helping his parents and always looking after Mr. Kingsley, who is forgetful and also cannot see as well as he used to. He often can’t remember where he'd left his glasses, how many slices of bread he’d put on his plate for lunch or where he’d placed his socks! Martin, is very happy to help the kind man. He, assists in tying up the laces on Mr. Kingsley's boots correctly, locates a lost Christmas tree ornament and fixes a bit of misplaced holly, on the stairs.


With the arrival of Mr. Kingsley's familyon Christmas Eve, they'd all started to prepare for the much anticipated visit from Santa Claus and his reindeer! The little mouse joined in with the celebrations, including the singing of Christmas Carols. When it was close to the midnight hour, he scurried back to his little home and tiny bed, not expecting any gifts at all. His mother had explained to him, that Santa Claus, only visits the children of the world. Christmas morning arrives and the whole mouse family is in for a huge surprise!

The moral to Martin’s story is that rewards are usually bestowed upon those who do good deeds for others, most often they arrive from an entirely unsuspected source. 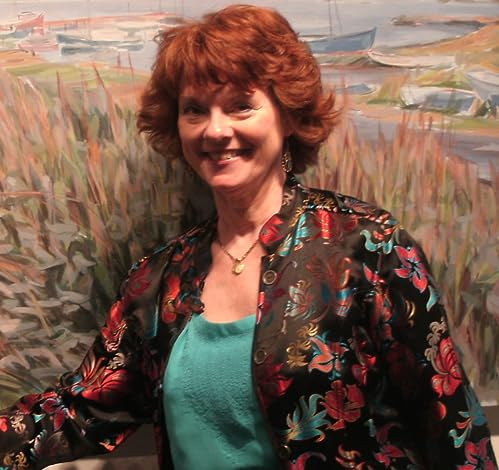 JANE WHITEOAK is an author who currently lives in Ontario, Canada. She has had a thirty year career in media communications and public relations. Jane has written four previous books for pre-school children while working as a programme director for the York-Toronto Lung Association. The books were entitled: Morris The Mule, Rupert The Rabbit Who Smoked, The Puffless Dragon and Fitness in Your Schools, co-authored by Dr. Robert C. Goode, a professor of physiology at the University of Toronto.

These books were distributed throughout North America including the Johns Hopkins University in Baltimore, Maryland. She was a television on air host and researcher interviewing fascinating people from all walks of life including musicians, artists, writers, astronauts, athletes and political figures from all levels of Government including the Prime Minister of Canada . After this satisfying career she returned to her love of writing for children. She is currently working on several new books, for various age groups that will be published soon! Jane is also a certified Montessori teacher.

Giveaway is a $50 Amazon.com giftcard