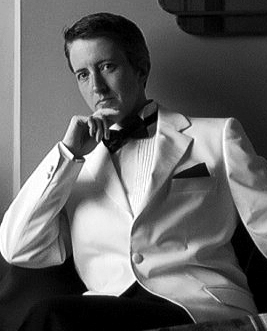 If you could invite any 5 people to dinner who would you choose? Aphra Behn, the first woman to make her living writing. We know very little about her life in Restoration England so to meet her and talk about the theatre as she knew it would be fascinating. I’d sit her next to Vita Sackville-West, another gutsy woman writer. Her work was unjustly, and often cruelly, criticized by her lover Virginia Woolf. Woolf’s talent came naturally, something she did not allow for in others, and Vita had to work harder at her writing. I understand that.
Then, I’d ask Jack Hobbs, arguably the most perfect batsman England has ever produced. I’d want to get some tips from him on improving my game. I’d also be interestes to get his take on how the game of cricket has changed since his day. Being an MCC member, he would have something in common with Stephen Fry. I admire him for being unashamed of his knowledge and acuity, at a time when being erudite and educated is deeply unfashionable.
Finally, I’d invite Charles Dickens. If dinner conversation lagged, he could give us a reading from one of his novels. I would have loved to have heard how he interpreted his stories.
If you were stranded on a desert island what 3 things would you want with you? For a writer, something to write with/on and something to read are too obvious! So… A blackcurrant bush (so I could make something approximating Ribena); a photo of my Dad (to inspire me and keep me going when things were tough); and, a bar of soap (so I could feel human again after a day of building, fishing, and keeping the fire going).
What is one book everyone should read? Great Expectations by Charles Dickens. Apart from being a cracking story with some of the greatest and most memorable characters in English literature, it reminds us of the importance of humility when faced with good fortune.
If you could have any superpower what would you choose? I have had this discussion with a friend of mine who chose invisibility. I teased her that invisibility is the superpower of gossips! I would choose time travel. You could do a lot of good in the world if you were to use it to win big on the stock exchange!
What is your favorite thing to eat for breakfast? Marmite on toast. And, not just for breakfast. It’s a good comfort food for when you are feeling unwell or hung over!
One food you would never eat? I’m not a fussy eater, and will try most things. I avoid irresponsibly fished or cruelly reared food. It is easier to say than do sometimes. I have to avoid eating moule now, after suffering an episode of food-poisoning, which is torture because I love it.
Please tell us in one sentence only, why we should read your book. It will change the way you think about transsexuals.
Any other books in the works? Goals for future projects? I have two books that I am working on. The next will be very different from “Black Art” and, using a fictional setting, will examine both sides of the argument on gay marriage. My third novel is likely to be a return to the world of Arty Shaw, my hero in “Black Art”. I’ve had lots of comments from people about how much they love him so I don’t think he’s done yet!
What inspires you to write? I find artwork – sculpture, paintings, photography – are the most fertile source of ideas for me. Whenever I am in London, I will always visit one of our excellent national collections to get a creative “shot in the arm”!
What’s one piece of advice you would give aspiring authors? Write the best work than you can, and then seek to publish. Don’t put anything out there that is sub-standard.
If you could choose only one time period and place to live, when and where would you live and why? The South Downs, England, between the wars. The 1920s and 30s was a period of economic hardship for many, but it was also a period of great literary output in Britain – an outpouring of work that set a vision of England in amber for generations to come. Writers like Rudyard Kipling, E M Forster, Virginia Woolf, and H G Wells, chose to make their homes there, and when Britain was threatened with invasion in 1940, it was the view from Chartwell across the Downs that inspired Churchill’s Battle of Britain speech. Visit the South Downs National Park today and you still get a sense of the “green and pleasant” England of village cricket, tea at 4 o’clock, and weekend house parties.
If a movie was made about your life, who would you want to play the lead role and why? My sister says that there is only one actor who could do justice to the role – Kermit the Frog! Who am I to argue with that?

Who are your favorite authors of all time? My favourite authors of all time are a mixture of British and American, but all from the early twentieth century. Absolute favourites? British would be Evelyn Waugh, and American would be Raymond Chandler.
Hidden talent? I ice celebration cakes. I did my sister’s wedding cake this year, and I’m doing one for a friend who is getting married after Christmas. I find the patience and detail required to get the finish therapeutic.
What was your favorite children’s book? Very traditional, very British: Winnie-the-Pooh. My father used to read it to me, and he would give the characters accents. Piglet was light and squeaky; Eeyore was plodding and slow; and, Kanga was a broad Aussie. I think it amused him more than the four-year-old me!
Which authors have influence you most how? “Black Art” was influenced by Chandler, Hammett, Spillane, MacDonald, and, to some extent, Runyon. My next novel will be influenced by other writers. I’m quite eclectic in that way.
Give us a glimpse into a typical day in your day starting when you wake up till you lie down again. I am disciplined about getting to my desk by 9am. I deal with the admin – answer emails, set up meetings, Tweet, look at new marketing opportunities, etc – that takes until 10ish. Then, I write for three hours. I grab a sandwich at 1pm and am out of the door by 1.30pm to be in work for 2pm. I cannot afford to write full time yet! I am back at my desk in the evenings, tidying up things I started in the morning. That usually takes about two hours. I tend to eat and watch television at the same time, as neither are particularly productive exercises! Then, to bed, and an hour of reading before lights out.
What TV show/movie/book do you watch/read that you’d be embarrassed to admit? Guilty pleasure? Probably DC Comics. I’m a fan of the new Batwoman series. I am very envious of the ability to draw like the graphic artists that work on those papers.
Favorite music? Musicals. They are corny, but the lyrics are often clever and witty. I like that ability to play with language. Who can’t smile when listening to a big show stopping number like “Hello, Dolly”?

Email ThisBlogThis!Share to TwitterShare to FacebookShare to Pinterest
Labels: B, V