Buy Now @ Amazon
Genre – Mystery & Thrillers
Rating – R
Connect with Michael Allan Scott on Facebook & Twitter
Website http://michaelallanscott.com/
Lance Underphal was devastated by his wife’s death, and now, the down-and-out crime-scene photographer can’t let her go. He wakes up plagued by premonitions. The double shooting of an Arizona real estate developer and his mistress/bookkeeper immerse Underphal in a world of incomprehensible phenomena.
Frank Salmon, the hard-boiled homicide detective on the case, does his best to blow off Underphal’s “visions.” But the murders keep piling up and the visions are all-too real.
Salmon reluctantly pursues Underphal’s twists and turns, leading him from a popular strip club to a failing community bank, adding a blackmailing stripper’s murder to the body count.
Underphal struggles mightily with his psychic curse, teetering on the brink of insanity. His only hope for redemption is the voice in his head, the voice of his dead wife. Stumbling through dark vortexes of murderous intrigue, he comes to realize his visions will either kill him or lead to the capture of a killer-maybe more than one.
About the author 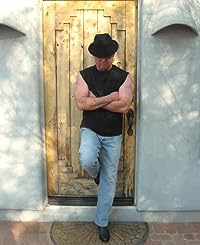 Born and raised at the edge of the high desert in Kingman, Arizona, Michael Allan Scott resides in Scottsdale with his wife, Cynthia and their hundred-pound Doberman, Otto. In addition to writing mysteries and speculative fiction, his interests include music, photography, art, scuba diving and auto racing.

*FREE ALERT* - Dark Side of Sunset of Pointe will be free from 28th December to 30th December.
Giveaway is a Kindle Fire HD 7″
a Rafflecopter giveaway
Open to anyone who can legally enter, receive and use an Amazon.com Gift Code or Paypal Cash. Winning Entry will be verified prior to prize being awarded. No purchase necessary. You must be 18 or older to enter or have your parent’s permission. The winner will be chosen by rafflecopter and emailed after which he / she will have 48 hours to respond or a new winner will be chosen. This giveaway is in no way associated with Facebook, Twitter, Rafflecopter or any other entity unless otherwise specified. The number of eligible entries received determines the odds of winning. VOID WHERE PROHIBITED BY LAW.
at 05:30