Buy Now @ Amazon
Genre – Mystery & Thriller / Technothriller
Rating – PG13
*New Release*
Connect with Lars Guignard on Facebook & Twitter
Website http://www.larsguignard.com/
WARNING: Blown Circuit, the eagerly anticipated sequel to the #1 spy thriller, Lethal Circuit, is here. If you don’t like turbo-charged action adventure, then you’d better find some place to hide.
Michael Chase is back.
But now he has enemies. Deadly enemies.
Good thing Michael is no mood to play nice.
Michael Chase survived China. Barely. But now he’s got bigger problems.
A pair of coordinates broadcast on an obscure frequency have brought Michael to Istanbul, Turkey where credible chatter has emerged that a terrorist group plans to use a devastating device to hold the world hostage.
Designed by Nikola Tesla, arguably the greatest inventor of the Twentieth Century, the device is experimental, it is capable, and it has been missing for almost sixty years.
If Michael is to prevent a catastrophe, he’ll need to get to the device before the Conspiracy or risk upsetting the global balance of power forever. Of course, finding the Tesla Device is one thing, knowing whom he can trust with it is another matter entirely.
To survive, he’ll have to do both. If he doesn’t, what started as a bad day is about to become a disaster.
Can Michael fight his way through the lies and deception to save the world?
If you can’t get enough of the action of Lee Child and Vince Flynn, the intrigue of Robert Ludlum, and the adventure of Clive Cussler and James Rollins, you are going to LOVE Blown Circuit!

Buy Now @ Amazon
Genre – Mystery & Thriller / Technothriller
Rating – PG13
(3.9 / 83 reviews)
Connect with Lars Guignard on Facebook & Twitter
Website http://www.larsguignard.com/
WARNING: “You will not be able to let it go until you read to the very last page.”
From Bestselling Amazon Author, Lars Guignard, comes the #1 turbo-charged, Techno-Spy Thriller, Lethal Circuit.
A Chinese satellite is on a crash course with Earth. It contains enough plutonium to irradiate a large city.  And that’s the good news…
Michael Chase is a twenty-six year old backpacker, a recent college grad, an amateur. He flew to Hong Kong to find his missing father. Four hours later, he’s running for his life. The Chinese Secret Police want him dead. The Conspiracy wants him dead. And the one person who he thinks is on his side, may want him dead too. If Michael is going to live, he’ll need to find a hidden piece of Nazi technology lost since World War II. And he’ll have to do it before anyone else. Because if he doesn’t, a little plutonium is going to be the least of his problems.
Can Michael Chase team up with a beautiful but deadly MI6 agent to find a lethal piece of Nazi technology that will save the world?
If you can’t get enough of the action and suspense of Lee Child, the intrigue of Robert Ludlum, and the adventure of Clive Cussler and James Rollins, you are going to LOVE Lethal Circuit!
Praise for Lethal Circuit
*Watch for the soon-to-be-released explosive sequel to Lethal Circuit - Blown Circuit. The action is about to blow sky high!
**If you were looking for a chilling paranormal mystery try Lars’, Brood. It’s a wild and frightening ride deep into the Alaskan wilderness where fish are being bred for more than their meat.
***If you’re a kid or a kid at heart, try Lars’ children’s chapter book, Ghost Leopard. Join Zoe and Zak as they journey high into the Himalayas in a magical adrenaline fueled adventure to a place few have been, and even fewer have returned to tell about it.
About the author 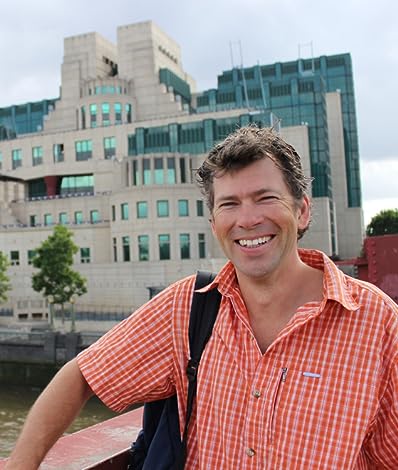 Lars Guignard is a former television writer and graduate of both McGill University and the American Film Institute in Los Angeles. His work can be seen on television screens across the globe in such cult classics as Beastmaster and Big Wolf on Campus. His bestselling novel, Lethal Circuit, has been a TOP 100 Amazon Technothriller since its release.
Lars’s work has also been produced for film and published in magazines. Ever since attending high school in the Indian Himalayas, Lars has been an avid backpacker and traveler. He now makes his home in the Pacific Northwest where he is busy completing the next Michael Chase thriller for release in 2012.

*SPECIAL OFFER*
From now till 31st December 2012 the author is offering a 25% discount for a paperback copy of the following books.
GHOST LEOPARD 25% off
Coupon code is CQ3XXT28
Purchase link is https://www.createspace.com/3883138
LETHAL CIRCUIT 25% off
Coupon code is J5B45PUZ
Purchase link is https://www.createspace.com/3775071

Email ThisBlogThis!Share to TwitterShare to FacebookShare to Pinterest
Labels: B, L

Wow, they both sound like winners to me. I love action adventure. Good luck with both Lars, I don't think you'll have trouble with sales on these two.