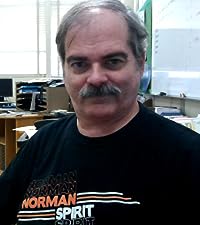 Do you find it hard to share your work? Yes and no. Writing comes from someplace deep within the writer—at least powerful writing does. As a result, publishing is an act of personal revelation as much as anything else. Complete strangers will see a part of the author that perhaps even close friends haven’t in the past. Actually, though, complete strangers were the least of my worries. I was more concerned about people I knew, especially fellow English teachers. In that case the issue was not self-revelation as much as the obvious question, “Will they like it?”

On the other hand, I think almost everyone who is driven to write is also driven to seek an audience. Someone trying to use writing as his or her primary income would naturally need to have an audience to make money, but my day job provides most of my income, and yet I seek readers just as zealously as if I would starve if I didn’t find them. For me writing and communication are inseparable. If I didn’t have something I wanted to share with other people, I wouldn’t be writing in the first place. In the long run, my desire to share overrode my fear of self-revelation and my fear of the possibility that people might not like my work.

Do you plan to publish more books? Now that I have started, I don’t think I will be able to stop! I see Living with Your Past Selves as the first of at least a three part series, and I am already at work on the second novel in the series. (There is something about the main character, Taliesin Weaver, that demands further exploration. Also, the ending of Living with Your Past Selves pretty much cries out for at least one sequel.) I am also considering some non-fiction projects that make use of my teaching experience. I’m about a third of the way done with a short book giving parents advice on how to communicate effectively with teachers, and I’m seriously considering developing a book of writing tips for high school students that will merge text with instructional video. When will I stop writing? I guess when I die…unless of course I come back.

What book genre do you like the best? Fantasy or young adult would be the easy answer, since that’s what I have been writing so far. However, I am one of those people who have a hard time picking a favorite. I also love science fiction and horror, but really my tastes are eclectic—if a book is well written, I’ll probably want to read it, regardless of genre.

What books have most influenced your life? The Lord of the Rings trilogy was a big influence in pulling me in the direction of fantasy, the genre in which I currently write. Even earlier, though D’Aulaires’ Book of Greek Myths gave me a love of mythology that put me on the pathway toward the fantastic. I read that book so often as a kid that I literally wore it out. As time passed, I read so many other books it would be hard to isolate specific recent influences. Each book contributed a little to who I am—just as I hope each of my books will contribute a little to who my readers are.

Why did you choose to write this particular book? “In every block of marble I see a statue as plain as though it stood before me, shaped and perfect in attitude and action. I have only to hew away the rough walls that imprison the lovely apparition to reveal it to the other eyes as mine see it.” Michelangelo

Please don’t think I’m trying to compare my talent to Michelangelo’s, but I feel sometimes that I stumbled upon my novel rather than creating it.

I have been reading fantasy for so long and teaching high school for so long (over 30 years) that writing young adult fantasy seemed inevitable at some point. Oddly, though, Taliesin, the main character, developed originally as part of another project. I wanted to do a text on Greek mythology that would be more approachable for high school students than some of the older texts are. I conceived of it as a frame story in which high school students reviewing for a mythology test would re-tell the myths to each other. Taliesin was a twist—a mythic figure transformed into one of those very high school students. The ancient Greeks for the most part did not believe in reincarnation, but the ancient Celts did, so having Arthur’s bard reincarnated as a modern American teenager could have worked. However, when I had the time to write, I found the mythology project, such a good idea in theory, just didn’t seem to inspire me. The figure of Taliesin did, however.

If an Arthurian character like that were reincarnated as a modern teenager, what sort of problems would he have? How would his special abilities hinder or support him in his coming of age? In a very real sense, Living with Your Past Selves grew from the character of Taliesin. I researched the medieval Taliesin stories and used them to shape the antagonist and the conflict in the book, and at each step during the actual writing of the book, I asked myself, “What would someone like Taliesin do in this situation?” Once I had him fleshed out, it was not hard to imagine how he would respond in each case, and from his responses, the plot evolved. During the process, I discarded some possible story lines that would have been impossible if I wanted Taliesin to behave as he would if he were really the person I envisioned. With that kind of process, in some ways the book wrote itself.

Who designed the cover? Considering my lack of talent in the visual arts, you may be surprised to learn that I designed the cover myself. However, the image I licensed from Shutterstock.com, and the font design I licensed from Digital Juice. Though I may not be capable of creating raw material in the visual arts, I’d like to think I have a good eye for putting pre-existing elements together.

What do you consider the most challenging about writing a novel, or about writing in general? I like both creating and revising my material. For me the hardest part of writing is finding the time to do it. I envy professional writers who can devote all their working hours to it. Don’t get me wrong—I love my day job (teaching) and would not give it up to have more time to write. Still, it would be nice if there were two of me…

How do you promote this book? Any way I can (lol). Seriously, I started out knowing nothing about promotion. I just thought I’d put the book up on Amazon, and over time people who liked young adult fantasy would find it.  Pretty naïve, huh? When it dawned on me that, after the initial flurry, the book was just going to sit there unless I pushed it, I started researching different advertising techniques and gave those a try that seemed to have had some success for other authors. The methods that work the best seem to be campaigns, like those offered through Book Gorilla, that target potential readers already interested in your genre. Advertising to a general audience is not as effective for fantasy or YA writers like me, though it might be somewhat more effective in the most popular genres.

From now till 5th August, be a part of Bill Hiatt’s “Find Me A Treasure” book tour.
Each blog stop will have a special clue or question.

Answer these in the Rafflecopter below and stand a chance to win a $50 Amazon.com gift card or cash via PayPal

Email ThisBlogThis!Share to TwitterShare to FacebookShare to Pinterest
Labels: B, L