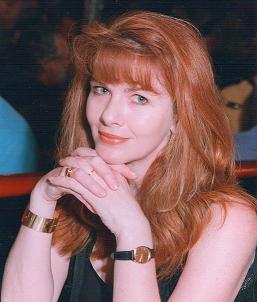 When did your first know you could be a writer? It began when I would write little plays for my four brothers and me to act out for my long-suffering parents. We had a wonderful book of children’s stories called The Treasure Casket (which I still have), so there was no shortage of themes. I had a great and eager cast; we would make the invitations and costumes, prepare a meal for our audience of two (my parents had to buy all the ingredients for the meal and pay for the show as well!) and then act out the play.

Then I began writing amusing poetry about family events and family members. I would also illustrate these poems. I still have every single one of my poems. Gradually I drifted into writing, and then jumped from the theater into editing, and then full-time writing.

What is your greatest strength as a writer? I think it is never getting writer’s block. My mom used to ask me about this and I would always reply, “Oh, I’ll think of something.” I always do. Reviewers most often comment on my descriptions of places and characters in my book/s. I rely on my imagination to get my characters into and out of situations, and to sometimes take the lead. Right now I am thinking about my fourth book in my middle grade adventure series. I have the title, the ideas, and what I want my heroes to achieve – I just need to put it all together.

Is there a message in your book that you want readers to grasp? I want to inspire young readers who enjoy my book with the idea that “You can do it. You can go to an amazing place and have an incredible adventure. You can be a hero and you don’t need a magic wand.” When the boys’ aunt admonishes them and says there’ll be no adventures, just a nice safe tour, Adam says to himself in Chapter One, “Anything can happen in Egypt.” Well, more than anything did happen! Life is an adventure so live it, is my motto.

The smallest of incidents in a new and unusual place can prove to be an exciting and elevating experience for a child. We have become cushioned and comfortable in a world with techno-amenities. We have forgotten how to really see/smell/touch/taste/hear the experience of life.

Any new and unusual location will spark a child’s imagination. It doesn’t have to be Egypt—it can be a wilderness trail, a national park, a countryside visit, a marine excursion, an encounter with animals, a totally different environment that stimulates the senses. My two nephews were 10 and 12 when we went to Egypt and it was amazing to see them react to the things they had only read about—such as monuments, mummies (yes!), camels, vast expanses of arid desert … When they returned they were certainly different. Their experiences changed them.

How much of the book is realistic? Apart from the character of the Scarab King, everything in the book is based on reality (history/geography/archaeology), but with a ‘magical’ twist. Egypt is such an exotic location and the adventure in The Secret of the Sacred Scarab is so different from anything the average child experiences that it is definitely a way to transform their perceptions.

They’ll be reading about two boys their own age standing in front of the Great Pyramid, riding an uncomfortable steed (a camel) across a scorching desert, coming face to face with an angry giant cobra, and experiencing such unusual cultural traditions that it will spark their imaginations. The cities they’ll visit with Justin and Adam (the heroes) will be long-dead cities and temples of incredible magnitude, still impressive even in a ruined state.

The monuments won’t be modern statues—they’ll be gigantic effigies of long-dead pharaohs, queens, and tributes to the many Egyptian gods of days gone by. Now that’s the kind of reality that becomes magical for any young reader.

How did you develop your plot and characters? Believe it or not, but a family trip to Egypt with my mom and my two nephews inspired the book. We had a wonderful time, filled with exciting and memorable events, and on our return I decided to do something different. I decided to write my nephews a short story to keep as a souvenir of our holiday.

I had lots of inspiration from the country and from the interesting people that accompanied us on our tour. Some of them inspired my characters a great deal, if only they knew how much! Pretty soon that short story just ran away with me, and turned into a book, a middle grade adventure, filled with action, mystery, history, geography, archaeology, and all the kinds of hands-on/solving clues stuff kids love.  By the end of the book, I knew there was still a lot of story to complete. So, here I am with a book series facing me.

How important are villains in a story? Villains are sometimes the best part of the story. Besides, a hero can only be heroic if there’s a villain to offset his bravery. Villains and their evil machinations make life interesting. Someone has to stop them or foil their nefarious plans. I like all the villains in my books, those written as well as those planned. Villains are usually clever and wily. They rely on their brains, not brute force.

Their motives and desires are actually often as grand as heroic ambitions, just really on the side of bad, not good. Villains are also self-absorbed but they can see the bigger picture. A clever villain knows when to retire from the battlefield. After all, ‘he who fights and runs away, lives to fight another day.’ Villains keep the plot going. A multifaceted villain, such as a baddie who loves his mother, or volunteers at an animal shelter, is a villain with interesting angles. No one wants a thug: they want Machiavelli because he’s more intriguing.

Do you have to travel much concerning your books? I am such a globetrotter that I think my adventure series has just given me lots of excuses to pack and explore! I began travelling from an early age and I found the contact with other cultures shaped my vision of life and matured me.

I began to see life differently, and to appreciate how other people live, think, and feel about life. When the idea for the series grew, I just knew setting the various adventures in unusual countries would appeal to young readers. The Secret of the Sacred Scarab was inspired by my trip to Egypt. The next book was sparked by my trip to Britain; and hopefully I will complete the research for the third book by going on a trip to the jungles of Mexico.

Can we expect more books from you in the future? Absolutely. I am whizzing along. When I began researching the ‘mythology’ behind The Secret of the Sacred Scarab, I discovered such a deep and wonderful world of legends and ancient teachings that the book began to grow almost a ‘super identity.’ This back history became so compelling that I knew it couldn’t end with the first book.

The end of the first story then became the beginning of another. Writing the second book (The Search for the Stone of Excalibur) was quicker because Dark Ages Britain (the time when the historical Arthur lived) is not as complex or as well documented as Ancient Egypt. The themes are different, but the medieval world of ancient manuscripts and monasteries is as fascinating. Secret associations, poisons and cures … murder most foul … lots of good stuff.

I don’t get bored with the characters at all because their responses to each new story and situation bring out different aspects of them. Each book has such a strong theme, and a powerful message that goes beyond the mere story. For example: Book One emphasized the value of cultural heritage; Book Two (The Search for the Stone of Excalibur) will highlight the value of recorded history and the (often dangerous) power of knowledge; Book Three (The Temple of the Crystal Timekeeper) will uncover pressing environmental issues in the Mexican jungles, and so on. Each country I have chosen also has a unique aspect that enables me to give more to the reader without consciously hammering home a message.

Do you have any advice for writers? Yes, lots. I have written two good articles (on Getting Published and Self-Marketing) which are on my author site (www.FionaIngram.com) under Media Room. They cover just about everything you need to know. But here are four must-do steps.

Finish your manuscript. Have it professionally edited and prepared before sending it to an agent/publisher.
Start researching your marketing strategies from day one (while still writing). Just because you’ve written a book doesn’t mean to say people will automatically rush out and buy it. Subscribe to newsletters and e-zines because there is a wealth of information about the book trade, many ‘how to’ tips and articles, and lists of book competitions.

If you want to go the traditional route and look for an agent/publisher then use tools of the trade like the Writers & Artists Yearbook or plenty of online sites. You can also get tips on how to put together a killer book proposal or agent query letter.

Never give up and don’t take rejection/criticism personally. (This is the hardest part.) Create a mantra or self-belief statement and constantly repeat it. Your belief in your project will ensure it comes to fruition.

What are some of the best tools available for writers, especially ones just starting out? I could wax lyrical for a very long time on this subject because there is just so much around now for writers. The long trudge of knocking on agents’ doors and receiving rejection letters might be a thing of the past for writers who have a good product and want to launch a book themselves.

I found an excellent post by Suw Charman-Anderson (who writes for Forbes Magazine) on Author Services. In her first article she explores what author services companies can provide. In her second article she explores choosing who to work with. Both articles cover all bases. Then a site I highly recommend is Joel Friedlander’s site The Book Designer. Joel offers a huge variety of advice, articles, and practical tips. Lastly, I just reviewed an excellent book by Hank Quense called Managing Your Self-Publishing Project that gives a step-by-step planning program to creating and launching a book. I wish I’d known all this when I first started out on my publishing road.

Thank you so much for hosting me!