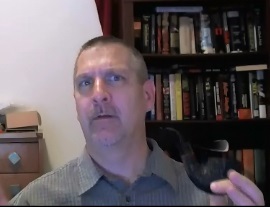 What’s the best way to improve your writing? Working with a professional editor.  Nothing is more useful than getting feedback that’s specific to a particular piece of writing, from someone who understands and appreciates the genre you’re working in.  Just make sure you check the “Predators vs. Editors” website before you hand somebody money and/or a copy of your stuff.


Was there one piece of advice that helped you the most? Being taught the definition of plot.  This is back when I was trying to be a novelist.  My editor at the time (Peter Gelfan, who’s outstanding by the way) spent three months convincing me I needed to learn what plot is.

It took so long because, of course, I already knew the answer.  Come on, I’d read entire books devoted to nothing but plot.  How could I not know what it was?  When I finally caved in and let Peter explain it to me, I thought, “Oh.  So that’s what a plot is!”

How do you define plot? The common definition of plot is “The stuff that happens during a story.”  That’s a wonderful definition if you’re part of the audience.  If you’re writing a story, it’s a lousy definition, because it doesn’t give you any direction at all.

Do you have any advice for people considering an MFA in English? Don’t do it!  My own experience getting an MA in creative writing wasn’t good.  It can be expensive, and typically (because you’re partially footing the bill by working as a graduate assistant, and because you have course work to complete) you wind up with less time to write than you thought you would.

If you’re determined to get an advanced degree in writing, make sure you choose a school where at least one professor writes the same genre or style that you want to write.  This is one mistake I made, and I wound up at a school where all the creative writing teachers were into “literary” fiction, while the stuff I wanted to do (SF, fantasy, horror) was sneered at as “mere genre fiction.”

What’s your approach to sending out reviewer copies of a self-published book? I sent out a lot of reviewer copies of the Potter book.  Those copies showed up immediately on Amazon.com in the “good as new” bin.  The only place that actually reviewed the Potter book was Midwest Book Reviews, who specialize in reviewing small press and self-published works.  Sending your book to any of the major players (New York Times, whatever) is pretty much like buying a lottery ticket.  The payoff could be huge, but the likelihood of getting looked at is very, very low.

What do you consider your greatest strength/weakness? I’m able to focus on a single topic.  This is both a strength and a weakness.  I think it helps me drill down into a subject, to become immersed in it.  But when it comes to promotion, you really need to be able to multi-task.  Getting a blog out consistently, popping onto Twitter every day, etc., while still getting your research and writing done:  you might as well tell me I need to dangle upside down by an ankle for the next year.  It’s totally unnatural for people like me.

What made you give up writing fiction? It’s more that I’ve given up trying to publish fiction.  I still like to write it, but I accept now that I’m missing the storyteller gene that you need to write great fiction.  With a lot of effort, and the help of an editor, I can write stuff that’s passable.  But when there’s so much great fiction out there, it doesn’t make sense to publish material that’s merely “okay.”

After writing two non-fiction books, was one harder to write than the other? The Jesus book was much harder.  With the Potter book, I’d worked through most of what I wanted to say before I started.  With the Jesus book, I thought I’d done that, but it turned out to be a vicious rumor and lie.  I had to throw away two manuscripts, and I had already started writing the third before I finally saw the approach I needed to take.
What made writing this latest book so difficult? Finding a way to actually communicate with the target audience.  How do you convince Christians they need to stop using three-quarters of the Bible?  Even now, answering that question feels like a closed-room mystery or a Mensa brain teaser.

The trick was to get inside the shoes of the people I wanted to reach, and figure out what might be more important to them than the Old Testament.  The answer I came up with was:  souls.  Surely Christians would be concerned about the people who are lost to the church because of the OT.  But the path to that answer involved walking a mile in the other person’s shoes.  Probably that’s always going to be the key, no matter what the subject is.