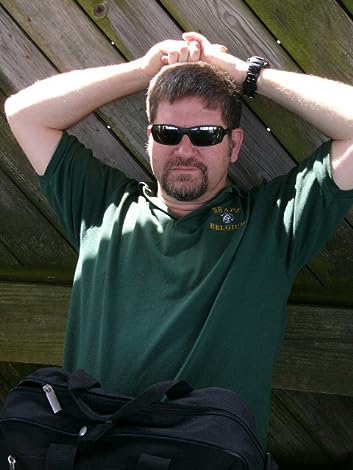 Tell us a bit about your family. I have a wonderful wife and publicist (what a great combo, huh?), three grown kids and three undergrown dogs. Since the children don’t absorb too much time anymore, I use it to write. My extended family is out in the US West, and I hope to return there within the next couple of years from my current location on the East Coast.

What is your favorite quality about yourself? I have an ability to create metaphors to explain difficult subjects. Some folks don’t think metaphors should be used very much in a novel. That’s like saying you shouldn’t put ketchup on a hamburger. Aha – see? That was a metaphor, and you knew exactly what I meant, right?

How long have you been writing? About a year, in which time I’ve published four books in a series, and two standalone works. I’m starting to slow down and concentrate on improving my quality, editing, and all those other things that go with trying to set myself up for success, but I have one book written but not published yet, and several more in various stages of development.

When did you first know you could be a writer? I’ve always known it. I’ve been a technical writer in some form on and off for almost thirty years, all my adult life (I’m 49). The only question ever was, how to translate the craft of communication into writing good stories and prose.

What inspires you to write and why? An audience. I don’t think I’d write if I was not published. In fact, I’m sure of it, since I didn’t. I’m not one of those writers who writes for himself. I’ve always been something of a performer, just like my brother Andrew, who has a degree in theatre. Mine was in history, but it was role-playing games that really game me the chance to tell stories to an audience.

How did you come up with the title of your book? It was pretty easy – the Eden Plague is the title and the Eden Plague is the Maguffin – the main plot driver. It’s a healing virus that also enhances the conscience. This creates all sorts of interesting moral dilemmas, as well as threatening to upend the world. For example, if everyone is healed of all illnesses, what happens to the multi-trillion-dollar healthcare industry? The drug companies? What about criminals, who don’t want that conscience bothering them? What about people who think it’s mind control? What about those who don’t want the world to change, and will do anything to maintain the status quo? All of that drives the suspense and plot of the Eden Plague.

Can you tell us about your main character? Daniel Markis is a highly-trained special ops combat medic with a broken body, PTSD, and a drug habit. He’s the perfect candidate for a secretive organization to test out their virus on, but he doesn’t react quite like they think he will and the whole thing blows up in their face. He doesn’t want to join up, be controlled and play their game.

He’s a highly moral man caught in a tough situation, and he’s been putting off facing his demons for a while. It takes a threat to a woman he hardly knows to galvanize him into taking direct action, and one thing leads to another until he has to take charge of other caught up in the situation.

Everything proceeds from his desire to save lives instead of take them – which he did plenty of already, but he never really wanted to. Confronted with the Eden Plague, a healing virus, he has to make some tough decisions about how to use that knowledge, or even the disease itself.

How did you develop your plot and characters? I write The Eden Plague pretty organically – in fact, my first draft and first edition was in first person, before I rewrote it into third person I could expand the character threads and plot. First person is very easy to do, but hard to do well – powerful but tricky to get right. This method did have the benefit of getting 80% of everything down on paper pretty fast – I think I wrote the book in about five weeks – and then all I had to do was tinker.