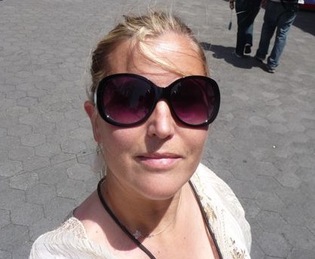 Tell us a bit about your family.  Ha, they will love that question…(I will DEFINITELY have to think up some good dirt for the next time I get asked this). For now I’ll just say I have two lovely parents, as well as an older sister and a younger brother, each of us around two years apart. I grew up in Saratoga, California, which is on the eastern edge of the Santa Cruz mountains in the south Bay Area, about forty miles south of San Francisco. So yeah, you can imagine how it was growing up all roughly the same age, ha! There were some fantastic fights and parties and craziness over the years, but we’re all really close now, and I love visiting them and their families, especially my five nieces and nephews (who, they would require me to say, are totally epically awesome)!

What’s your favorite place in the entire world? Honestly, at the risk of sounding like a regionalist snob, probably San Francisco, although it’s changed a lot over the years. I also fell in love with Paris…and Bangkok. And yeah, I’m kind of a city person, as you can probably tell. I love the energy of cities, especially if they are beautiful, and/or set in a beautiful environment.

How has your upbringing influenced your writing? Huh. Lots of ways, actually. My parents had bookshelves pretty much all over the house while I was growing up, and gave me tons to read…and varied stuff, too, from a young age. My mom and I still talk books and share our ‘finds,’ and she and my sister have both been active in book and reading clubs as adults. On a different note, living where we lived, up in the hills of the Santa Cruz Mountains, provided a lot of inspiration in different ways…from the natural beauty to some of the quirks of the new Silicon Valley culture that emerged during my own formative years. As a part of that, I was lucky enough to grow up with the kids of some of the more creative and innovative people out there at the time.

Do you recall how your interest in writing originated? Actually, no, I don’t…not precisely, but I think I geared into writing as a means of telling stories pretty much as soon as I learned how to write at all. My personality quirks convinced me early on that it was often safer to write down some of the weird stuff that came into my head than it was to voice it aloud…and I always loved telling stories, pretty much from birth. According to my mother, I ‘marched to my own drummer’ from day one, and always kind of had my head in the clouds. I used to think that made me a freak. Now I know it just makes me a fiction writer.

When and why did you begin writing? I think I was around six or seven. I have a few of those early stories. They’re pretty funny, partly because I see some small element of the same themes that plague me even now as a writer…meaning the ideas I tend to chew on over and over in different ways in a lot of my writing. Most of them involved dogs or rabbits, though. I was a huge fan of Watership Down, obsessively so as a kid.

How long have you been writing? Well, again, depends on how you count. I’ve been writing fiction and nonfiction for myself since I learned how to write English, in some form or another. I wrote a novel in high school, then another in my early twenties. Then I spent about 10-15 years re-drafting and rewriting that same novel to get it ‘right.’ I wrote about five or six versions of roughly the same story and characters from beginning to end during that time, and did a mind-blowing amount of world-building for the universe I’d created, but a lot of that period was a colossal waste of time, frankly, although I did publish a few short stories and worked as a freelance journalist during the same period. I finally broke out of that death spiral about six years ago now, and since then, my entire approach to writing fiction has changed. I started publishing with two short stories at the end of 2010, when the indie publishing thing was first emerging, and I haven’t looked back.