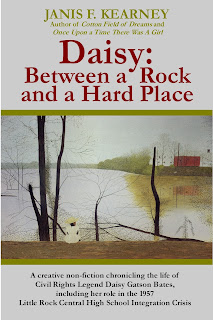 Daisy: Between a Rock and a Hard Place

Presidential diarist and author Janis F. Kearney transforms civil rights legend Daisy Gatson Bates’ life from black and white, to living color.  The author, who interviewed Bates many times; recreates her conversations and interviews to “fill in” places left un-filled, and colors incidents and experiences, to bring Daisy Bates to life. Kearney plums the mysterious murder of Bates’ mother, and the orphan’s childhood; the young woman’s prophetic decision to share a traveling salesman’s life; her non-traditional role as co-publisher of an award winning newspaper; and her leadership role at a time, and place where women rarely led.
Between a Rock and a Hard Place is Daisy’s “look back” at her life, and…finally, a self-analysis of how, and possibly, why she became the Daisy Gatson Bates for which she is known throughout the world.  Author Janis F. Kearney recounts the leader’s many friendships, relationships and associations that helps define who she was in the eyes of the world - from Presidents Kennedy, Johnson and Clinton; First Lady Eleanor Roosevelt; the Reverend Martin Luther King, Jr.; Roy Wilson, NAACP President; Thurgood Marshall and Wiley Branton, NAACP attorneys, Maya Angelou and Jackie Robinson… and countless others.
The author met Daisy Bates in the summer of 1969, at the age of16. From that moment, the high school student dreamed of working for the woman her father called one of Arkansas’ greatest leaders – black or white.  The book is based on the author's personal interviews, oral histories, conversations and in-depth research.


Praise
"Thank you to Janis F. Kearney for shedding a critical light on an often forgotten civil rights heroine. Daisy Bates was a woman who refused to be defined by society's rules on both race and place in America. An often controversial figure, Bates lived life on her own terms, for which she paid dearly. She was an American hero who loved her country for all its greatness; but courageously proclaimed it could and should be better." ~Sharon La Cruise, Producer 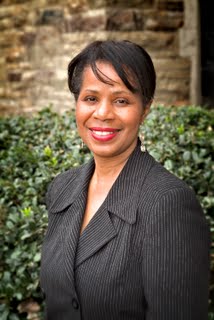 Janis F. Kearney is a publisher, author, and oral historian. She was one of 19 children born to Arkansas Delta Sharecroppers T.J. and Ethel Kearney. She Graduated from the  University of Arkansas at Fayetteville with a B.A., in  Journalism, and completed 30 hours in public administration, and Journalism.
She was hired by Daisy Bates in 1987 as Managing Editor of the Arkansas State Press.  In 1988, she purchased the newspaper.  She served as Personal Diarist to President Clinton from 1995 to 2001.  She was the country’s first personal diarist to a U.S. President, and during that time, she also served as White House liaison to the U.S. National Archives.
In 2001, Janis moved with her husband Bob Nash to Chicago, where she began her writing life.  In 2003, Janis, with her husband’s support, founded Writing our World Press/WOW! Books  in 2003.  Her first book, Cotton Field of Dreams: A Memoir was published in 2004. Her other books include Something to Write Home About: Memories of a Presidential Diarist; Conversations: William Jefferson Clinton…from Hope to Harlem; and Once Upon a Time there was a Girl: a Murder at Mobile Bay, her first fiction. WOW! Books has also published two other authors. Her next book, Daisy: Between a Rock and a Hard Place, is scheduled for publication, December 2012.  Her third memoir, Sundays with TJ: 100 years of Memories on Varner Road,  and her second Once Upon a Time there was a Girl murder mystery are both slated for publication in Spring, 2013.

Open only to those who can legally enter, receive and use an Amazon.com Gift Code or Paypal Cash. Winning Entry will be verified prior to prize being awarded. No purchase necessary. You must be 18 or older to enter or have your parent enter for you. The winner will be chosen by rafflecopter and announced here as well as emailed and will have 48 hours to respond or a new winner will be chosen. This giveaway is in no way associated with Facebook, Twitter, Rafflecopter or any other entity unless otherwise specified. The number of eligible entries received determines the odds of winning. Giveaway was organized by Kathy from I Am A Reader, Not A Writer http://iamareadernotawriter.blogspot.com and sponsored by the author. VOID WHERE PROHIBITED BY LAW.