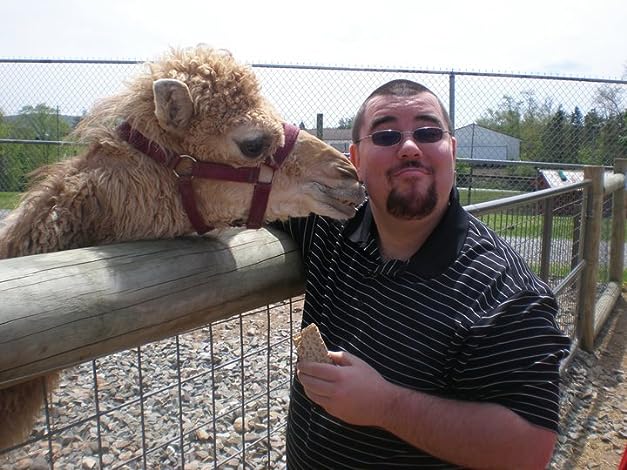 Tell us a bit about your family. I’m married to a wonderful woman named Maya. We live in York, Pa where we are both full time inner-city teachers. We have 6 furry, four-legged children: three dogs (Sadie 13, Rigby 8, and Angus 5) and three cats (Grimlock, Molly, and Pumpernickel). All six animals were rescues, something we believe very strongly in. in our spare time we enjoy hiking, bowling, and refusing to rake our leaves in order to see how angry our elderly neighbor will get.

What is your favorite quality about yourself? I like my ability to see the funny side of even the darkest situations. This tends to come out a lot in my writing, as it can be going along dark, dangerous, and exciting, and then all of a sudden I’m cracking an impromptu and likely inappropriate joke. I can understand how it might annoy some readers, but it certainly keeps me entertained! Besides, I strongly believe that a writer should be both his own biggest critic, and his own biggest fan.

What’s your favorite place in the entire world? My hot tub, it’s where I do my thinking and book planning.

How has your upbringing influenced your writing? Well I attended an all-boys Catholic prep High school, so of course I like to make the Church the villain in most of my work. Since Rosehaven is set in 1503, it’s not bias, it’s historical!

Do you recall how your interest in writing originated? In high school, a group of friends and I began using this new-fangled invention called “email” to create a satirical newsletter for our classmates. We mocked politics, celebrities, social structure. It was like a less structured version of “The Onion”. Looking back, I wish we had stuck with it, because I’d probably be a millionaire by now.

What genre are you most comfortable writing? I enjoy Historical Fantasy because I get to make the rules for characters and plot and they don’t have to adhere to a preset notion of what the world should be. As well, my undergraduate degree is in History, so I have a strong background in medieval and renaissance era settings- at least enough that I can relate plot to major historical events (The Spanish inquisition in Rise of the Retics)

What inspired you to write your first book? Divine Intervention. A winged creature, wreathed in golden light, brought forth the plot with a single simple command- “If you write it, they will come.” I’m a bit hazy on the details, as I had consumed an abundance of tequila that evening.

Who or what influenced your writing once you began? My wife influenced me to keep writing until I finished the novel. Some nights she wouldn’t even let me have food, water, or sleep. (By the way, if anyone is reading this please call the police. I’m chained to a computer in the basement)

Can you tell us about your main character? I have two main characters transposed against each other. Jaxon Miniheart is a creature born of the contract union of an evil Demon lord and innocent human farm-girl. Thought from birth to be a being of extreme evil, the mischievous Jaxon begins to act in the way society expects until he meets his first, and so far only, friend- Tyranna Wolfskin. She is a shape-shifter raised in a monastic lifestyle to respect all life, even if it has horns and a spade tipped tail. Together they work together to navigate a time of troubles heading to Rosehaven.

Who designed the cover? Dan Coleman, a graphic designer and long-time friend of mine. He wanted to create the essence of darkness and adventure that the book entails, while showing the reader that this is not your typical fantasy (You will not find Vampires or werewolves in my books, and while I have Fairies, they run a casino and protection rackets.)

Why did you choose to write this particular book? I wanted to create a fantasy story rooted in mythology, history, and anthropology. I also wanted it to become a movie so I could be rich enough to buy a small private island. The sequel should get me a jet.

What was the hardest part about writing this book? Trimming it into a YA sized story. Original draft was well over 400 pages, and over a few months and some overly critical beta readers, we managed to trim and rewrite down to 285, a much more manageable size for my intended audience age of 8-15.

How do you promote this book? Usually I stand outside my house in my underwear and yell as loud as I can, but I’ve begun to think that I may need to change my marketing strategy.

Will you write others in this same genre? Certainly, I have already created an episode based serial about one of the characters, Gnipper Tallhat, a young gnome trying desperately trying to earn the respect she needs to be granted her own tall pointy hat.

Is there a message in your novel that you want readers to grasp? I deal with many themes involving racism (or in this case speciesism) that try to teach kids to look beyond skin color and pointy white horns, to a creatures true self. As well, I push the idea that in the right situation anyone can be a hero, regardless of their upbringing. I’m very into the idea of individuals working together on their own accord for the greater good.

Have you included a lot of your life experiences, even friends, in the plot? Without a doubt. Jaxon Miniheart was based on a fraternity brother of mine. Known far and wide as being the world’s biggest jerk, and a king of pranks and mischief, he was also one of the nicest and most loyal people I’ve ever had the chance to meet. In his own way he was both completely transparent and a façade.

How important do you think villains are in a story? More important than the heroes. I view writing like I view sports- it’s fun to watch your team win, but it’s more satisfying to watch your rival lose.

Who is your favorite author and why? Terry Pratchett, because his humor knows no bounds. He mixes serious and emotional plot lines with whimsical and astute humorous observations. He also has a really great hat.

Can we expect any more books from you in the future? Hundreds, if not thousands! I just need to find an army of squirrels. Than teach them to read, write, and type. After that I’ll have to get them library cards, because I simply don’t have the money to buy enough computers for an entire rodent army. However, once those simple little things are accomplished and my bushytailed servants are pumping out hundreds of pages of Stephanie Meyer level prose every day, then my writing will be unstoppable.

Have you started another book yet? Rosehaven’s second novel has a tentative release date of March 31st, 2013. This is assuming the world is not invaded by aliens. If it is, we may need to push it back a few weeks to account for the coming apocalyptic war.

Where do you see yourself in five years? Dead from a horrific Segway accident while on a humanitarian mission to save penguins in Antarctica. Fortunately for you it means my books will now be rare collector’s items prized by ebayers and reality pawn shop shows around the world. You should pick yours up right now to ensure a great investment in your financial future.

What are your current writing projects now? I’m finishing editing an anthology entitled “Gaia’s Misfits” with some short work from some excellent fantasy authors. As well, I’m completing the second installment of Rosehaven: the Hidden City, tentatively subtitled “The Battle of Sherwood Forest”

Are there any new authors that have sparked your interest and why? I hear T.J. Lantz is fantastic.

What are some of the best tools available today for writers, especially those just starting out? Pens and pencils. Paper is also a good tool, but can be readily replaced by light colored walls or babies.
Do you have any advice for writers? Just stop now. I’m sick of the competition. Put your pen down and let me have a chance! Stop stealing my thunder, Jerk!

What do you do to unwind and relax? I enjoy narrating my own daily life through opera.

When you wish to end your career, stop writing, and look back on your life, what thoughts would you like to have? None, because I won’t stop writing until I’m six feet under the ground. Hopefully, this is because I am dead and not because I have been buried alive by a rabid fan looking to add me to a collection.