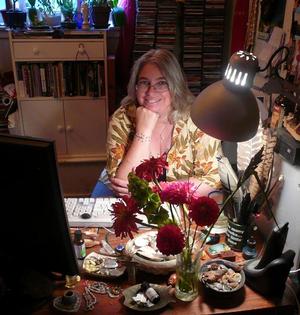 What’s your favorite place in the entire world? California.  There are a lot of things I like about a lot of places within California, but it’s the whole place I love. My fictional town of Oberon, California is a distillation of all my favorite parts.

Do you recall how your interest in writing originated? I remember the first time I tried to “write” something. I was still too young to read or write, but I still recall spending an entire afternoon putting words to a song I heard on the radio, and repeating them over and over to myself until I had them memorized.

How long have you been writing? Forever. But I’ve been writing seriously/professionally for almost thirteen years now.

When did you first know you could be a writer? It was right after I’d finished my third book. I felt like the first was a longshot and the second was a fluke, but by the time I had number three under my belt, I began to believe that this was something I could keep doing indefinitely.

What genre are you most comfortable writing? Well, romance, obviously. But anything in the paranormal/fantasy/magical realm is where I feel most comfortable. I do wish I’d stop trying to write mysteries or stories featuring cops (unfortunately, I doubt I really will stop) because that’s hard for me, but I guess some part of me must like it.

What inspired you to write your first book? My kids—ironically enough. I’d stopped writing when my son was born—I felt I didn’t have the time for it. But then I realized they were growing up with no idea that I had always considered myself a writer. To me, it was a big part of who I am, but they’d never seen me do it, so…I sat down to write my first book in hopes that I’d come up with something that would show them who I was.

What do you consider the most challenging about writing a novel, or about writing in general? The beginning of anything is hard. It takes a while to get the momentum going. Endings can be hard as well—I never want to say good-bye to the people who’ve been living in my head for several months.

Have you ever had writer’s block? If so, what do you do about it? Yes. It sucks. Sometimes it’s a sign the book is veering off course somehow and if I go back and re-read what I have or try changing the perspective, I can shake loose whatever’s had me stuck. But other times, I don’t know what causes it and can only struggle along until I get past it. Horrible, horrible feeling. I hate it.

How did you come up with the title? It’s a line from a poem—Break, Break, Break by Tennyson. “Oh for the touch of a vanished hand and the sound of a voice that is still.” This is one of the books I think of as my “twins”. The other book is titled Touch of a Vanished Hand. The books are kind of mirror images of each other in a lot of ways. One’s set in winter, the other in summer; there’s a winemaker’s dinner in each book—one occurs a third of the way into the first book, the other occurs two-thirds of the way through the other; the heroines in each book are identical twins.

Can you tell us about your main character? The heroine of Sound of a Voice That is Still is Siobhan Quinn. Siobhan has been hurt in the past and hasn’t gotten over it. Growing up, she was considered the “good” twin. While she seems very practical and gentle and a little aloof, underneath she’s passionate and very, very strong. She’s one of my favorites.

What was the hardest part about writing this book? The villain. Ugh. Every time I’d write a scene in the villain’s POV I wanted to take a shower immediately afterwards. Very unpleasant person.

Will you write others in this same genre? Already have. This is the third book in the Oberon series. There are nine books total and a couple of novellas. I do plan on writing a few more books based on some of the same characters.

How much of the book is realistic? Have you included a lot of your life experiences, even friends, in the plot? Well, Siobhan’s nature center is very, very loosely based on one in Berkeley where I volunteered for almost ten years as a docent. And a lot of the locations are based on real places, but that’s probably it.

Can we expect any more books from you in the future? Absolutely! I have two books already scheduled to come out this year, as well as a short story in an anthology—also scheduled for this year.

What are your current writing projects now? I’m working on a new steampunk story that’s set in the same “world” as This Winter Heart, the fifth book in my Children of Night vampire series and a follow-up to Edge of Heaven, my angels-in-limbo book.

Do you have any advice for writers? Yes. Don’t worry about writing the best book in the world. Just write the best book that’s in you.

What do you do to unwind and relax? I read. Sometimes I go to the gym. Hot baths and wine also help. A few weeks ago I was really, really stressed out and had to get away so I spent the entire afternoon at the movie theater. Luckily, there were some exceptionally long movies playing, so I only had to buy two tickets to get a good six-hour vacation in.

Do you have any upcoming appearances that you would like to share with us? I’ll be attending the 2013 Romantic Times Booklovers Convention in Kansas City this year ( May first through fifth). I’ll be signing books at both book-signing events.

When you wish to end your career, stop writing, and look back on your life, what thoughts would you like to have? End? Stop? I don’t understand the question. I don’t plan on ever stopping.