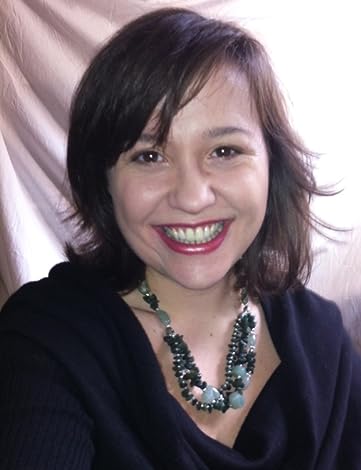 What are you most proud of accomplishing so far in your life? At this point I am most proud of having written and published two books, Protector and Decision Maker, Book One and Book Two of my fantasy series Anniversary of the Veil. I’ve always dreamed about being a writer when I grew up and now I guess I am

How has your upbringing influenced your writing? I moved around a lot as a child, which has given me a wide perspective on the world and the different cultures living in it.  I think this has greatly enhanced my own writing and made the characters I create feel more alive.

Do you recall how your interest in writing originated? Not exactly. Even before I could write I was fascinated by books, and I loved when my grandparents and parents read to me.  According to my grandfather, I had all the stories he would read to me (Disney’s Cinderella, Snow White, Sleeping Beauty,…) memorized after the first couple of times he read then, so he could never skip ahead in the story without me knowing

When and why did you begin writing? I began writing in Middle School and got a little more serious about it in High School. But I didn’t start writing with an aim to be published until after college. As for why, I just don’t know, it made me happy to write.

What inspires you to write and why? Lots of thinks ignite my imagination, a bit of a conversation, a random idea, the way the light glistens off a lake.  I’ll see or hear such things, then imagine a character being the one hearing and seeing them, and a story will be born.  I also like to listen to music while I write; classical music is great, as are those sounds of nature recordings. They really help me get into the story.

What is your greatest strength as a writer? That would have to be creating realistic, life-like characters. I am also very good at writing realistic dialogue.

Have you ever had writer’s block? If so, what do you do about it? I did, in the past, and I find the best thing is to just write through it.

Can you tell us about your main character? My main character is Protector Kea. He is a strong, kind of arrogant soldier who suddenly finds himself with very powerful magical abilities. His whole world is thrown upside down as a result off it and he must make sense of it all and rediscover himself in the process.

How did you develop your plot and characters? I think of a direction I want a story to go it, what it will be about, and who the main characters will be, and the rest just kind of falls into place as a result of it. For example, in Protector, I started with a Princess who was facing an arranged marriage she didn’t want, and the rest just grew out of that. Even Protector Kae, who ended up my main character, even though I originally intended for him to only be one of the supporting cast, so to speak.

Who designed the cover? I did

I initially paid a cover artist, but I wasn’t satisfied with the result and ended up designing my own.  I must say I really enjoy the process.

What was the hardest part about writing this book? Definitely the revision. I literally didn’t touch the book for a year after I first wrote it, because I didn’t know how to revise it. I ended up taking a course on revision, which helped a lot. I no longer fear revision, and I think I’m even getting pretty good at it.

Can you see yourself in any of your characters? I think there’s a part of me in everyone of my characters.  Though some are more like me than the others.

How do you promote this book? I promote through my social media accounts on Twitter and Facebook. I also have a blog, and occasionally do interviews and guest posts.

Will you write others in this same genre? Yes, definitely. I love fantasy and am soon going to start on Book 3 of my Anniversary of the Veil series. This book will conclude the series, and then I will start a new one. I’ve had the idea for it in my head for the longest time, and I’m eager to start writing.

What is your favorite color? Black.

What is your favorite food? Pizza.

What’s the best advice anyone has ever given you? To thine own self be true.

What’s your favorite season? Spring. I love watching nature wake up after the long winter slumber.