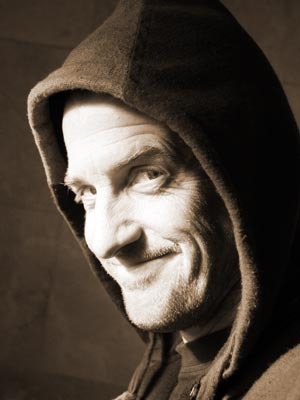 Have you ever had writer’s block? If so, what do you do about it? I’ve got it right now.

Stories sometimes need time to develop. In the meantime I write something else … which results in some interesting author’s blogs and interviews.

Can you share a little of your current work with us? Because many readers responded to the character of the Riddler himself, I am working on a prequel that explores his early years. In The Riddler’s Gift he appears as a wise and tricky guide; when he’s young he’s both unwise and unguided.

How did you come up with the title? The Riddler’s Gift is a title that begs a question of the reader. Who is the riddler? What is the gift? One might suspect it has something to do with the ability to solve puzzles, to see the truth hidden in plain view. The whole book is an introduction to the major story, Second Sight, when you get to look at things again and realise that the cosy little fantasy tale built around a conflict between dark and light is a bit of a school room, and so the gift was the transformation that comes upon the heroine from being encouraged to look at herself and achieve self-mastery. Some readers won’t see the story in that way, and that’s okay too, for them it’s just a catchy title.

Can you tell us about your main character? I have five main characters, because it is more interesting to see things develop from different points of view and helps to develop the tension between them. The story is centred around the singer Tabitha, because I wanted a female lead to show us a fresh version of the journey to wizardry in a typically male-dominated fantasy role. I also wanted to bring in some romance and sensitivity to the tale.

How did you develop your plot and characters? The characters drove the story: I’d imagine being in a scene as the villain, and wrote what took place. Then play ‘what happens because of that?’ Most consequences are logical, but magic is tricky, and can be a big problem in fantasy writing. Most authors either solve the problem by using very little of it (e.g. Tolkien, Martin) or by devising some impediment to its use. I am fascinated by magic, so I wanted to see what would happen if the wizards were actually allowed to use their power. It plays havoc on your plotting, because powerful wizards can only be threatened by those of greater power, and very soon you have a conflict of apocalyptic proportions. I didn’t want to overwhelm new readers, so I knew Riddler’s Gift it had to be restricted to the first level of magic and the greater possibilities of power are only hinted at beyond the shield of Eyri.

Who designed the cover? A brilliant artist who goes by the tag of theDURRRRIAN on deviantart.com (a great website for browsing potential cover art styles). I contacted him and asked for a quote. I described the concept and within a day he had produced such striking artwork it seemed to come from within the story world. He has serious talent. I am a graphic designer so I was happy to do the typography myself but most artists would be able to do that too. A good cover is a great boost to a story because it helps to entice readers into your world.

Why did you choose to write this particular book? I’ve read a lot of fantasy and enjoyed the stories immensely, but it seemed to me there was something different missing in every one, like a missing word in a spell that stopped the story from completely sweeping me away. Writing The Riddler’s Gift comes from the need to say what hasn’t been said, to complete the unfinished tales. Although I strive to make it great, I don’t believe that I will get it completely right. My writing will have its own gaps that will inspire new authors to craft their own tales. So it’s not only good writing that inspires, it’s also the silence around good writing that begs to be filled by new voices.

What was the hardest part about writing this book? The longer the story, the harder it becomes to hold the whole thing in your head. Being a full-length epic of 250,000 words it has a scale that sometimes boggled my mind, especially when other work took command of my neurons for a few weeks. So I’d often reread the book from beginning to refresh my memory, and again for every editing pass. This has taught me how wise Terry Pratchett is (short, standalone, punchy stories) and it has given me immense respect for authors like George RR Martin who can weave together authentic tales that span thousands of pages.

How do you promote this book? I’ve chosen to focus exclusively on Amazon Kindle, because it’s the largest etailer and has the simplest author interface and tools. When there is a surge of interest in the book, then Amazon’s system takes over and promotes it well, but when it’s out of the limelight it’s hard to find effective promotion platforms. Most paid advertising I have used is ineffective. Occasionally the book will be free on Amazon which boosts publicity, but it’s usually very low priced anyway to reward curious readers with an easy buying decision. I put most of my energy into writing a good story and editing it well which leads to readers posting positive reviews.

Will you write others in this same genre? Definitely, I love fantasy.

Is there a message in your novel that you want readers to grasp? Life is a miracle and just being alive is reason enough to be happy. I’m an optimist, and although I enjoy creating a moody dark gothic atmosphere in my stories, there’ll always be a flame at the end of the tunnel. Wily readers might suspect a dragon.

How much of the book is realistic? The paradox of fantasy writing is that fantasy becomes unbelievable when it’s unrealistic. My magic system obeys strict rules and the laws of nature are respected. If you want to enter a world where “magic was a raw force, released from the confining code that so tightly binds it today” then you will believe what you see in The Riddler’s Gift.

Have you included a lot of your life experiences, even friends, in the plot? Friends sometimes inspire a character, but usually they are unsuitable for fiction, because my friends are nice people. Stories are driven by conflict, and people with serious flaws are more interesting. So I tend to use my enemies as fuel for writing. If I encounter an arrogant muppet in real life, he will become a villain, and some time later, lose his head. It’s an effective way to deal with my rage. It’s a good thing I’m not a wizard. There’d be too many corpses around.

How important do you think villains are in a story? Villains are easy to identify with, because we all have flaws. They don’t have to be pure evil; all they need is one overdeveloped human trait. When a fly irritates me, I smash it, and feel satisfied when it’s dead. So it’s easy for me to understand how someone could swing a sword. If it’s the smaller one doing the swinging, I might secretly applaud him. Of course, in the modern society it’s not entirely right, but it feels good to imagine laying waste to our enemies, because it’s in our nature to do so. Learning to consider other resorts before smashing our opponents with a double-handed Morningstar is to begin the journey from the middle ages to the 21st century. Villains are essential to a satisfying story, we need them to express our rage, to indulge in our fantasies, or just be utterly reprehensible, and ultimately, to pay for their sins so that we might continue our enlightened and guilt-free existence.

Are you reading any interesting books at the moment? A Song of Ice and Fire by George RR Martin. I’m thoroughly enjoying the way he keeps me engaged in the story with strong interesting characters each with their own personal ambitions and challenges, and the way they are all woven together into one ever-changing but unified saga. He has a very accessible style, and he is ruthless. His story is set in a similar mythic space to my fantasy series, so switching between reading and writing is a pleasure, and he’s definitely adding fuel to my creative fire right now.