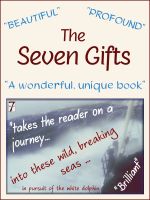 
This page 99 thing threw me rather. I read a few examples and they all seemed to stress the importance of every page making the reader want to move onto the next. I don’t quite see it like that with The Seven Gifts, probably because it is a contemplative story rather than an action one: I actually want to slow readers down, so they dwell on each page, which I have filled with often quite complex ideas that are not immediately apparent. If they speed-read they will only pick up surface reflections, and miss much of the book’s real content. In the paper book I even use a slightly cursive font to discourage speed-reading. In truth, rather than persuading readers to turn over the page to see what happens next I would prefer they turn back to clarify what is happening now.

One reviewer @ Goodreads commented on this: “I really liked the style and setup of this book. It gave a little piece at a time that urged the reader on. Made me think that I would have a better understanding of the world after I was done reading it. I enjoyed taking it slow reading one "gift chapter" every couple of days. Not intentionally, but it made me think of each story separately allowing it to sink in fully”.

Page 99 of the ebook introduces the philosopher who features in the story of the fifth gift - The Philosopher’s Stone. The first line is the end of this sentence: ‘His world was full of winking lights and buzzers, spewing forth rationalised explanations that the half-baked intellectuals confused with truth.’

And the page ends with him talking about oak trees: ‘He sometimes wondered whether perhaps they knew it all; that all knowledge, in some strange way that men could never understand, was encapsulated in those strong flowing branches, the odd, crenellated leaves; drawn up in the sap from the Earth herself. For surely the Earth must possess knowledge to make the greatest of all thinkers seem mere schoolboys;’

The previous page starts thus:
‘One lovely spring day a philosopher was strolling through the woods, pondering on the questions of the time. And they were confusing times in the land of the Snow Queen, especially for an old, traditional philosopher like him. For seventy years now he had lived in that kingdom, most of his time spent on the only quest that need ever concern a true
philosopher - the interminable struggle to understand the purpose of his own existence. Why he should live. Why he should live here. Where this curious thing called human life came from; and where it was going to.’

In between he lies down in the woods in the sunshine and ‘ponders on the questions of the time’. A little later, he meets his stone.

I am not sure I want to say more than that.

a Rafflecopter giveaway
at 16:00