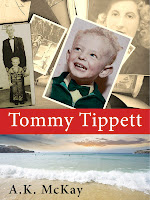 
Ace even joined in on the fun - he would lie in wait for Uncle Jack somewhere around the house, and when he walked past he would let out a mighty bark that would give Uncle Jack an almighty fright. Poor Uncle Jack just couldn’t win as now he was up against two well-trained household terrorists.

Besides trying to scare Tommy, Uncle Jack's favourite pastime was riding all over Sydney, on the public busses. He would set out early in the morning and ride busses all day using a single ticket, pensioners pass. It did not matter one bit where the bus was going, Uncle Jack would ride it to its destination, get off have a wander around, chat to whomever would chat back at him, hop on another bus and head off on another adventure. Sometime in the afternoon he would make the appropriate connections and catch a host of busses back to his home stop.

Uncle Jack was a walking Sydney bus timetable and he was keen to share this knowledge with whoever would listen to him. He would stop people in the street, point out a bus and explain to them where it started and where it was going. He would be able to tell a person what time a particular service started and what time it ceased. Whether the bus had a conductor or whether you had to pay the driver as you got on the bus.

Most people would give Uncle Jack a frightened look and scamper off, looking over their shoulder to ensure that he wasn’t following them.

From the front of Tommy’s house you could look see busses crawling up a hill in the distance toward Dover Heights and when they were not scaring one another Uncle Jack would love to explain to Tommy all he knew about that particular bus route. It didn’t matter one little bit to Uncle Jack that he told Tommy this information, over and over again.

“See that bus there on the hill Tommy?” Uncle Jack would point excitedly.

“Yep,” Tommy would say without either looking up or stopping what he was doing.

“Well that would be the 381 from the Bondi Junction Depot on its way to Belleview Hill.” He would then look at his watch to confirm the time.

“It would have left the depot at ten forty five.”

“M’mmmm,” was the only reply he got from Tommy, who didn’t look up from playing with his toy soldiers on the front lawn.

“It is due to terminate at the Belleview Hill stop at Twelve fifteen.”

a Rafflecopter giveaway
at 13:00