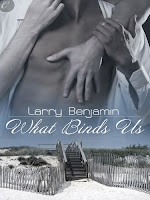 Before Pandora Poikilos asked me to do a blog on the Page99Test as part of the Orangeberry Summer Splash, I’d never heard of a page 99 test.  Once I understood the premise, I was terrified.  After all I’d written “What Binds Us” as a whole, not bits and pieces to be nibbled randomly.  It was meant, I thought, to be read in order from beginning to end to experience each characters story as the novel builds, as the story unfolds, love grows, friendship blooms.  Still, I’d signed up to do this and I am constitutionally incapable of not delivering on my commitments so here goes.

Page 99 of “What Binds Us” is just about the halfway point of the novel.  By page 99 we know that Dondi is seriously ill. Mathew and Thomas have found their way to each other and made room for Dondi when he needed them most because that’s what families do and above all they are a family.  Matthew and Thomas exhausted from trying to care for Dondi look to hire a housekeeper.  Up until this point the three young men and had been pretty insulated from the judgments of the world at large.  They clung to and took care of each other.  Their world, despite Dondi’s illness, was full of love and support.  They felt safe.  I knew when I started writing the scene on Page 99 that I wanted to shatter that peace they took for granted.

Page 99 introduces us to the first housekeeper they attempt to interview:

“She was a small woman with a halo of blue hair above her dead white face. She had a tiny rose bud mouth, the pursed lips painted a violent red, vivid as a wound. She carried an enormous black patent leather purse over her wrist, which she refused to relinquish her grasp on even after she was seated.”
First she questions the presence of Thomas who is sitting beside Matthew, in part because they are both men and in part because one is black and one is white.  This infuriates Dondi who has always been protective of Thomas.

“’They’re lovers,’ Dondi said from the doorway. He stepped into the room. ‘I’m Dondi. I have AIDS.’”

Things get ugly quickly, unexpectedly.  An explosion of hatred mushrooms out hard, fast and noxious.  Her mouth bloomed into a rabid contusion in her despising face. She spit hateful words: “You people are an abomination! I’m not surprised you have AIDS. You should all have AIDS. It is God’s judgment—”

It is Dondi who brings the scene to its crescendo:

“Dondi advanced on her, sweeping across the carpet like an avenging angel.”

With a hatred and animosity equal to—if not surpassing—hers he tells her to get out and threatens her if she does not leave.

It’s a harsh scene and unlike any other in the book.  It wasn’t her hatred, or even her words, that was shocking in this scene; it is the fact that this tiny, mean woman with the enormous purse, a virtual stranger, could bring homophobia, racism and intolerance into their lives that is truly shocking.  The point I was making here was that safety no longer existed.  Generations of gay men had enjoyed sexual freedom—sex without consequence or responsibility—and taken that very freedom for granted. Now the specter of disease threatened that freedom.  Dondi, Thomas and Matthew had formed a family of their own making, built a world of unconditional love and acceptance and a stranger tried to take that away.  Could they ever feel safe again?

“After she left the three of us stayed in that room, gasping for breath. It was as if her words had been a strangling rope; Dondi’s face was flushed, and a vein stood out at the side of Matthew’s neck. My head throbbed.”

Before the page ends, the character of Portia is introduced:

“This woman’s powdery face was the color of nutmeg. Her hair, piled high, was twisted into braids thick as Medusa’s snakes. Half-moon glasses, black as ink in the daylight, rode low on her nose. Her laughing eyes danced above them. Her paramilitary jacket was cropped short and massively padded, exaggerating her broad shoulders. She was, in a word, magnificent.”
“’Hel-lo,’ she said in a voice made baritone by years of cigarettes and Old Grand Dad straight up. ‘I am Por-tia.’”

It is Portia who will help restore equilibrium to the household bringing with her joy and faith.  She is the complete antithesis of the hateful woman who preceded her.  She’s strong and tough but loving.  When she herself discovers love in that household, we cannot help but cheer for her.  I introduced her quickly because I did not want this to be a story of homophobia and intolerance.  Despite tackling some weighty issues this book was meant to be uplifting, positive, a testament to the resiliency of the human spirit.

Rather than trying o make each page a page turner, I tried to create likeable, interesting characters who readers would grow attached to and feel invested in so that they would turn pages because they cared
about each character and wanted to know more of their story.

a Rafflecopter giveaway
at 19:00